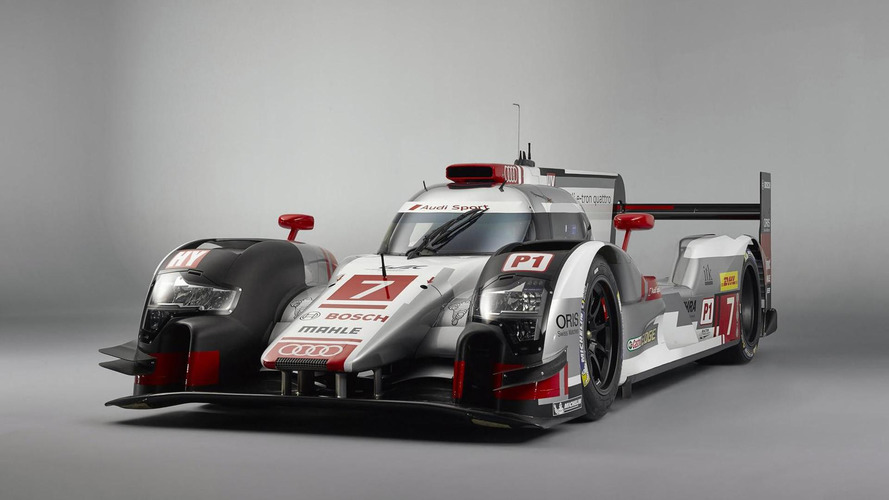 Audi Motorsport has taken the wraps off the 2015 R18 e-tron quattro scheduled to compete in the FIA World Endurance Championship (WEC).

Audi Motorsport has taken the wraps off the 2015 R18 e-tron quattro scheduled to compete in the FIA World Endurance Championship (WEC).

The new version has some big shoes to fill taking into account last year's model triumphed at Le Mans, but Audi is confident they can repeat the 2014 success thanks to a more aerodynamic body. It features larger air inlets in the redesigned front wheel arches along with reshaped headlights benefiting from matrix LED and Audi Laserlight technologies. Also new are the front wing, hood and engine cover while the monocoque has been carried over.

Audi has prepared two body configurations suitable for various tracks of the 2015 WEC calendar and they have also optimized the chassis in collaboration with Michelin. The engineers were responsible for doubling the amount of energy from two to four megajoules per race lap at Le Mans and during braking the energy recovered is then sent back to the front axle during acceleration.

The electric motor has been upgraded to 272 HP (200 kW), representing a "significant increase" compared to last year's variant while the encapsulated flywheel energy storage system can now store 700 kilojoules which is 17% more than before.

The LMP1 prototype tips the scales at just 870 kg (1,918 lbs) and now consumes 2.5% percent less diesel per lap than last year in order to meet the more stringent regulations implemented by FIA. Output of the TDI 4.0-liter V6 engine stands at 558 HP (410 kW) and only five engines will be available during the 2015 WEC season.