When in doubt, flat out.

On that front, we'd say this particular testing session was a success. It's not every day we see an M3 wagon, never mind one at the Green Hell with its front brakes exercised to the point of glowing orange. The photographer for these photos was definitely in the right place at the right time, capturing this well-used test car in crisp detail as it passes the camera on full boil. The wagon leans slightly to the left as it negotiates a fast right-hander, showing minimal body roll for a vehicle capable of carrying five people and their luggage.

There isn't much new to report with these images, at least from a design standpoint. 2288 appears to be wearing the same camo wrap as when we first saw it back in August 2020. The wheels even look the same, though after seeing this batch of photos we doubt the tires are the same. It's extremely odd to see the same test vehicle in public, so either BMW is using the same number plate for multiple prototypes, or the test fleet for the first official BMW M3 station wagon is just really small. 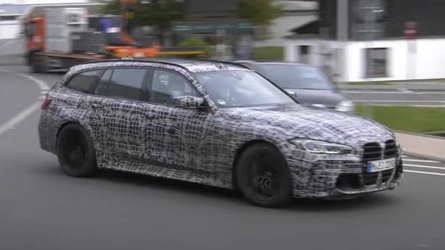 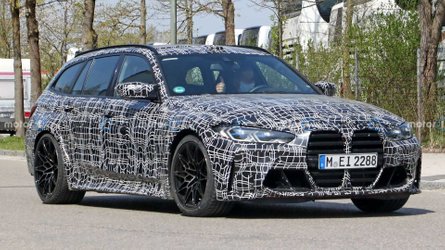 In any case, the wrap isn't hiding much. The M3 Touring will literally be an M3 with a bit more junk in the trunk. The big grille holds firm for the estate, feeding air to the BMW's familiar twin-turbocharged 3.0-liter inline-six engine. We expect it will be the 503-horsepower (375-kilowatt) version from the M3 Competition, channeling power to all four wheels so it can battle the Audi RS4 Avant. That means an eight-speed M Sport transmission handling cog swaps instead of a manual, but we suspect M3 Touring buyers will prefer that setup.

When will we see it revealed? Our sources are saying 2022, and with BMW recently releasing a teaser photo of the M3 Touring (using the same 2288 car no less), we expect to see it sooner rather than later.