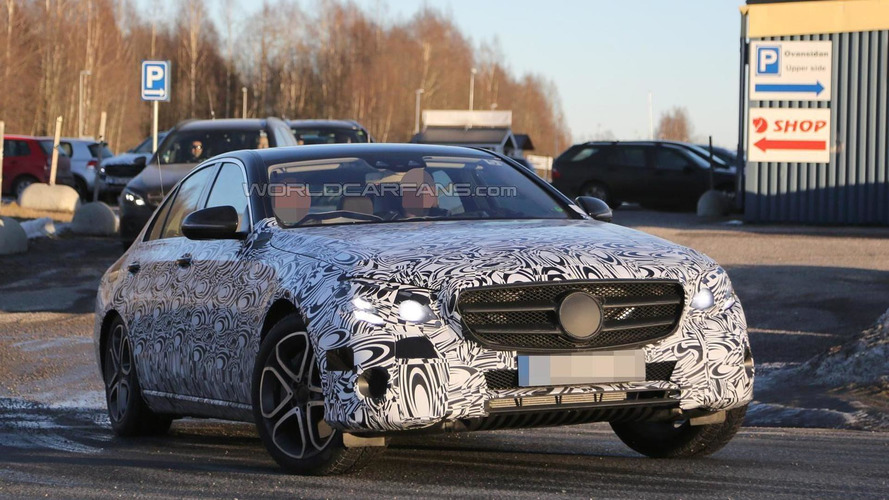 A large test fleet of next generation Mercedes-Benz E-Class prototypes was spotted on its way back from testing in Scandinavia.

A large test fleet of next generation Mercedes-Benz E-Class prototypes was spotted on its way back from testing in Scandinavia.

It was only yesterday when we published a spy video with the E-Class (W213) and now a batch of prototypes were caught on camera returning from winter testing in Scandinavia. Mercedes-Benz has removed some of the disguise which allows us to take a better look at the design that unsurprisingly will be heavily influenced by its brothers, the C and S.

Upon closer inspection we noticed two different front grille designs, fresh alloys while in some of the photos you can see the trunk is open. The prototypes were carrying production-spec headlights and taillights sporting a familiar design while the side mirrors were completely exposed and showed sleeker turn signals. There is a photo with the front-right door open but unfortunately everything is hidden. However, previous spy shots have shown a dashboard heavily inspired by the S-Class.

Since the C-Class is now bigger than its predecessor, Mercedes-Benz will have to make the E-Class a little bit larger so expect an extended wheelbase which will provide a more generous interior cabin. There also might be a Maybach version with an even longer wheelbase and individual rear seats, just like on the Mercedes-Maybach S-Class.

Riding on the MRA platform, the new E-Class will be lighter than the outgoing model and could be offered with an array of newly developed inline-six engines while the range-topping Mercedes-AMG E63 will probably use a twin-turbo V8 4.0-liter. A plug-in hybrid version is likely in the works as well and could use an adaptation of the hardware installed in the C350e which has a 2.0-liter turbo gasoline engine, an electric motor and a lithium-ion battery. Later during the car's lifespan there might also be a fully electric version, but nothing is official at this point.

The new E-Class Sedan is expected to go on sale approximately 12 months from now and will be joined by the wagon, a long wheelbase sedan, coupe and cabriolet.