It will serve as the basis for the next-gen VW Amarok.

Ford brought back the Ranger in the United States for the 2019 model year, but the current generation of the midsize pickup is much older than that, having been originally introduced in Australia back in 2011. The teaser campaign for the new truck is in full swing, and in the latest episode, the thick camouflage has been replaced by a more revealing body wrap.

According to the Blue Oval, the revamped Ranger's pixelated appearance with hundreds of blue, black, and white blocks takes after the Bronco R and has been conceived "to break up the appearance of the underlying shape of the vehicle while it’s still under development." We're honestly not so sure about that since the livery leaves little to the imagination.

We get to see the redesigned LED taillights in full, along with a fresh alloy wheel design and a new sports bar in the bed. Speaking of which, the corners of the rear bumper have built-in steps to make it easier to access the cargo area, while the fenders seem to be a tad wider compared to the outgoing Ranger. A shark fin antenna is noticeable, as is a recess in the tailgate to diminish the risk of damages from trailer hitches.

The new Ranger is more important than ever as aside from spawning the usual Everest SUV, it also serves as a foundation for the next Amarok as part of a tie-up between Ford and VW. Confirmed technical specifications remain shrouded in mystery, although we're hearing the five-cylinder 3.2-liter diesel will be discontinued while the Raptor will get V6 diesel and gasoline engines, depending on the market.

It's Been Spied Repeatedly: 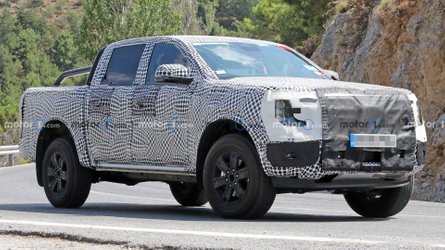 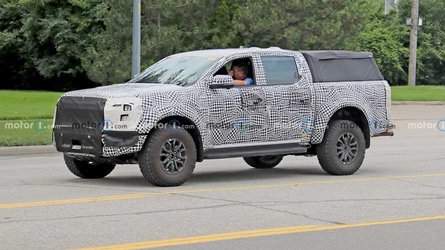 A plug-in hybrid Ranger is said to combine a 2.3-liter four-cylinder turbo gasoline engine with an electric motor for a total output of 362 horsepower (270 kilowatts) and 680 Newton-meters (502 pound-feet) of torque. Entry-level versions are allegedly getting a twin-turbodiesel 2.0-liter four-cylinder engine, but nothing is official at this point.

The interior is expected to accommodate a 12-inch digital driver's display and a larger 15.5-inch touchscreen for the infotainment system arranged in portrait mode. Lower-spec cars could have a smaller 12-inch central display, with both setups featuring SYNC4 and support for wireless Android Auto and Apple CarPlay.

Even though the new Ranger is probably only a few weeks away from being officially revealed, with sales in Australia, Thailand, and other markets starting at some point in 2022, the rumor mill claims the US-spec model will take a lot longer to hit the market. It supposedly won't go on sale until July 2023 after entering production in May at the company's plant in Michigan. The midsize pickup truck is said to have an eight-year life cycle.