Nobody was injured, but someone's Corvette dreams are hurting right now.

What's worse than totaling your brand new car just after picking it up? Seeing it totaled on the delivery truck before you even see it unwrapped, that's what. To be honest, we don't know for sure if the new Chevrolet Corvettes on this transport truck are spoken for, but with demand still strong and supply chain issues hampering production, we're betting they are. Or rather, they were.

The good news is that the truck driver in this firestorm of 'Vettes wasn't injured, according to Road & Track. We have footage of the fire courtesy of Corieblue Fickes on Facebook, who grabbed a video showing a car carrier loaded with new Corvettes blazing into the night sky north of Nashville, Tennessee. We don't know the exact location, but we do know at least four cars are a complete loss, never mind the truck. Be warned, there is some strong language in the video. But if we were a football field away from a blazing big rig loaded with cars, we'd have some choice words of our own.

The cause of the fire is unknown, though it apparently started with the rig. The photo below comes courtesy of Corvette Blogger, and it sure looks like the blaze started under the semi's hood.

The cab is unrecognizable, and there's almost nothing left of the Corvette on the overhead ramp. The second Corvette on the upper ramp is also completely burnt, and the heat caused the third ramp to collapse on the C8 behind the cab. The blue 'Vette is at least recognizable as being blue, though with the front scorched, it's likely a total loss as well. Perhaps the engine is salvageable at least? 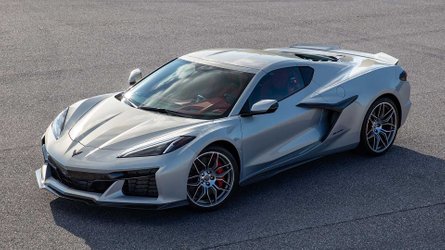 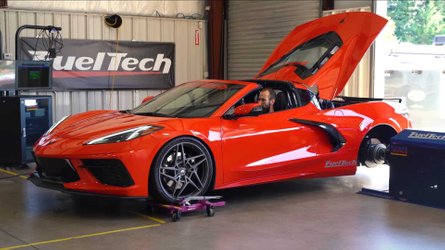 It appears the damage was relegated to the cab and the four cars carried there. A fully loaded transport carries six additional cars on the trailer, so the load might not be a complete loss. Ironically, with this occurring north of Nashville, the truck didn't get far from the Corvette assembly plant in Kentucky.