Next generation BMW X3 caught on camera for the first time 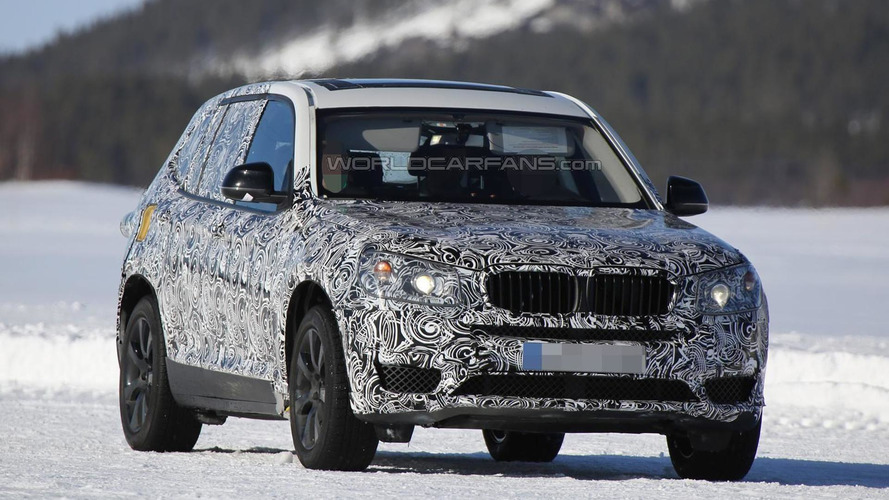 The third generation BMW X3 is making its spy photo debut ahead of a rumored 2017 market launch.

The third generation BMW X3 is making its spy photo debut ahead of a rumored 2017 market launch.

Spotted testing near the current model, the next-gen X3 is codenamed "G01" and judging by these spy images will keep roughly the same shape while the design will be evolutionary. Despite wearing a full body camo, we do notice the front grille sits a little bit lower and seems to be wider while the rear end hosts a flatter window and a dual exhaust setup. Those unattractive headlights and taillights are preliminary as BMW is only using them while testing prototypes so the production car will get entirely different lighting clusters.

The engine lineup should likely carry over from the current X3 facelift but most of the motors will receive a power bump. There are some talks about a potential M40i version featuring a twin-turbo inline-six engine developing 360 HP (264 kW) while rumors are even suggesting a fully-fledged X3 M with as much as 422 HP (310 kW).

A more frugal derivative using a plug-in hybrid setup is apparently in the works as well and will likely use an adaptation of the hardware installed in the xDrive40e, a follow-up to the X5 eDrive concept. That one had a four-cylinder, 2.0-liter turbo gasoline engine with 245 HP & 350 Nm combined with a 95 HP & 250 Nm electric motor providing a total output of 340 HP & 600 Nm.

A rear-wheel drive layout will be standard but at an additional cost some of the engines will be optionally paired with an xDrive layout.

Since the production version is expected to come out in 2017, chances are BMW will preview the third-gen X3 with a concept sometime next year.