Last month, the AutoTopNL YouTube channel posted a short video of a tuned Audi RS3 Sportback hitting a bonkers 193 miles per hour (319 kilometers per hour) on the German Autobahn. The video only showed off the speedometer, though, which isn’t that overly exciting. However, a new video from the same channel posted this week provides the driver’s POV of the high-speed run – and a few failed attempts – as the car rockets past traffic.

It actually takes the RS3 Sportback several attempts to find a portion of the road that would allow the high-speed run, though it had no trouble hitting it once the traffic cleared. Several high-speed runs took the car well past 124 mph (200 kph), though the final run of the video is the high-speed one. The driver starts from a dead stop before entering the highway, as the car hits 124 mph in about nine seconds. It takes another 20 seconds or so to hit 184 mph (300 kph), though its acceleration really starts to slow.

The car only has so much power, and it was reaching its limits toward the end of the video. The car has a tuned 2.5-liter five-cylinder engine producing 666 horsepower (497 kilowatts) and 590 pound-feet (800 Newton-meters) of torque, which routes through Audi’s Quattro all-wheel-drive system. The engine’s output is a big jump over the stock numbers, which have the model making 395 hp (294 kW) and 354 lb-ft (480 Nm) of torque. 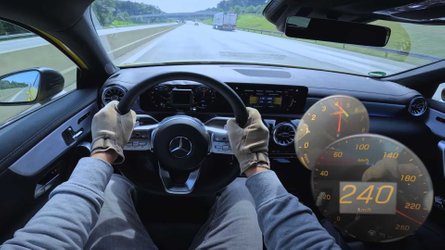 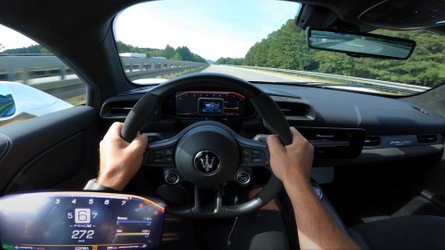 Watch The Maserati MC20 Go Flat-Out On The German Autobahn

The POV video adds back the feeling of speed and danger that was missing from the previous video. Seeing the greenery blend into a blur as the car goes faster and faster helps share the sense of speed the RS3 was traveling at. Watching vehicles grow quickly in size before whooshing past and disappearing as the Audi cruises down the Autobahn never gets old.