In February this year, Volkswagen unveiled the Golf GTI Clubsport 45 as a nod to the original Golf GTI that debuted 45 years ago. The special version of the hot hatch brought performance upgrades over the standard Golf GTI for a 0-60 miles per hour (0-96 kilometers per hour) sprint in under six seconds. Based on the Golf GTI Clubsport, the special edition model relies on the more powerful version of VW’s 2.0-liter turbo unit with 296 horsepower (221 kilowatts).

But how good is this upgraded version of the GTI? A new drag race by the Motorsport Magazine channel on YouTube compares the Golf GTI Clubsport 45 with the Renault Megane Trophy and Leon Cupra. All three are potent hot hatches that are currently not available in the United States. In fact, only the VW Golf GTI is expected in America but Volkswagen’s US site is still showing only the Golf GTI Mk7 with a starting price of $28,695. 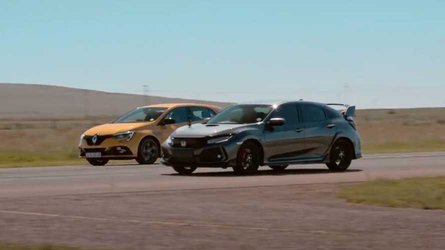 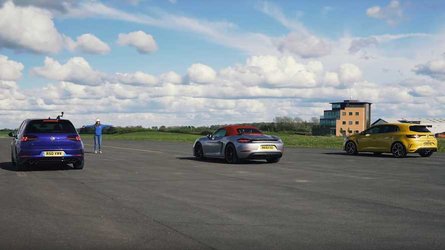 The French contender in this drag race uses a 1.8-liter turbocharged inline-four engine that’s delivering 296 hp (221 kW) and 310 pound-feet (420 Newton-meters) of torque in the Trophy trim level. On paper, it reaches 62 mph (100 kph) in just 5.7 seconds, which is pretty close to what the Golf GTI is capable of.

The third competitor comes from Spain and the SEAT-owned Cupra performance brand. Basically, it uses the same hardware as the Golf GTI but has different settings for most of its units. It’s available with either 242 hp (180 kW) or 296 hp (221 kW) with the second figure matching the Golf GTI Clubsport 45’s output. We don’t know which state of tune the car from the video has, though we believe it’s from the more powerful variant.

These three hot hatches are very identical yet very different. The drag race in the video above shows pretty clearly that similar recipes can lead to very different results.