The center-mounted triple exhaust is staying, but it has a different configuration.

Even though Honda has yet to reveal the new Civic Si, the Japanese marque appears to be eager to preview the next Type R ahead of its 2022 release. The hot hatchback will be heading to the Nürburgring for additional testing, but before that, it's posing for the camera wearing full camouflage attire. Already visible are the Brembo red brake calipers and grippy Michelin Pilot Sport 4 tires.

It would appear the new Type R has far fewer faux air vents than its predecessor as the large plastic bits at the back are gone. Interestingly, the center-mounted triple exhaust is still there, but the middle tip is now larger than the outer ones. In the old version, the middle exhaust tip is smaller and serves as a resonator. Also noticeable is the position of the rear wing since it now sits slightly higher on the tailgate and has a flatter shape.

Much like the regular 2022 Civic has a significantly cleaner design than its predecessor, the Type R also does away with the busy look of the old one. The front end appears more aggressive with a larger lower air intake flanked by what we are hoping to be real vents hiding under the red and black camouflage. The upper grille seems to be chunkier as well and has a honeycomb pattern slightly different compared to the standard Civic Hatchback.

Honda is being tight-lipped about the technical specifications for the time being, but we do know from previous statements both the Si and Type R will come exclusively with a manual gearbox. Wild rumors had suggested a 400-hp hybrid powertrain and even AWD for the hot hatch, but the latest intel indicates it will be an evolution of today's 2.0-liter FWD recipe, presumably with a bit more power. 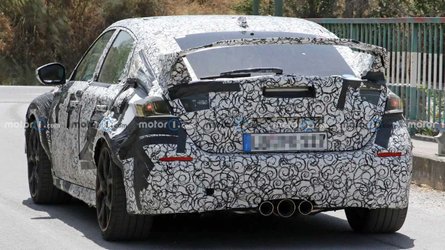 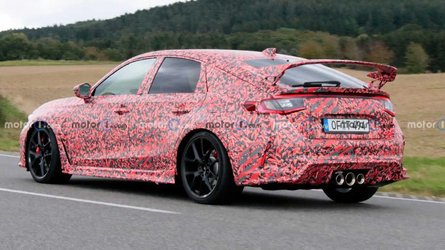 The Civic Type R will be the last Honda in Europe to feature a pure gasoline engine once it will arrive at some point next year. Meanwhile, the Si's debut in North America is allegedly imminent.