Patience is often rewarded, and we bear witness to that with this fresh set of spy photos. A prototype for the next-generation Kia Niro was caught testing in public, but as day turned to evening, the heavy camouflage on the nose was removed. A spy photographer was still on duty and grabbed all kinds of images showing the Niro's extensively reworked front end.

It's not the first time we've seen the new Niro's face so exposed, but these images do offer the best look at those Habaniro-inspired headlights. The concept didn't actually have headlights like this, instead brandishing prominent corner vents with zig-zag LED strips in the middle. The bottom of the light housing seen on this test vehicle mimics that shape, with more traditional lights positioned in the housing. Furthermore, we know that Kia's tiger-nose design language is going away, replaced by a shark-themed shape that is also reminiscent of the Habaniro concept from 2019.

Heavy camouflage with fake panels still conceals the rear, or rather, it tries to. Our photographer catches this test vehicle at just the right angle as it passes, showing the steeply angled rear glass and boomerang taillights that were also shown on the Habaniro. It's a total departure from the current model, but the lower fascia looks more conventional with reverse lights and reflectors visible at the corners.

Kia certainly has an extensive update for the Niro considering it launched as a 2017 model. The automaker is also putting its powertrain to the test as seen here, towing a trailer heavy enough to make the compact crossover squat heavily at the back. Powertrain details aren't yet confirmed, though reports say the restyled Niro will stick with its current platform.

That would suggest the 1.6-liter four-cylinder hybrid arrangement will carry over, which generates 139 combined horsepower for the present-day Niro. A Plug-in hybrid version is also offered, not to mention the all-electric Niro which we've also seen in spy photos. 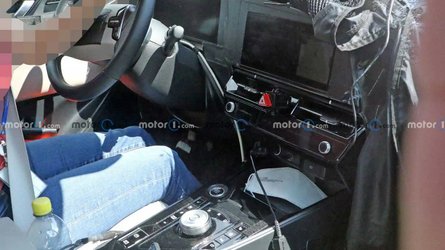 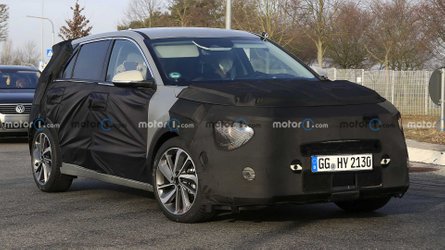 We initially thought Kia would debut the next Niro as a 2022 model, but 2022 Niros are already on the North American website. That doesn't mean we won't see this new style by the end of the year, however. It will likely appear first for the South Korean market, then arrive in the States early next year as a 2023 model.