A refreshed version of the Lamborghini Urus is under development. We’ve seen test vehicles out testing before, hiding its updated design under tight-fitting camouflage. However, it doesn’t hide all of the crossover’s design details. A new video from the Varryx YouTube channel captures one Urus Evo testing alongside a current model, which made discerning their minor differences quite easy.

The Lamborghini’s mid-cycle refresh is expected to give the model revamped fascias paired with other minor updates, and the new video highlights those differences. At the front, the grille and intake openings receive a new treatment with simpler horizontal slats and new intake slats on the outside of the bumper. There are more significant changes at the rear, though it’s still a subtle upgrade. The rear bumper has a new shape that changes the design of the outlet vents located at the back of the rear quarter panel.

The video captures both the current Urus and the Evo variant accelerating, though it’s impossible to determine if they sound identical or different. The Urus Evo sounds ever-so-slightly throatier than the other, though nothing is certain. Last week, video captured a Urus fitted with microphones recording its own exhaust note, hinting at something different under its hood, though the company could have been measuring any number of things.

Check Out Other Lamborghini Spy Shots: 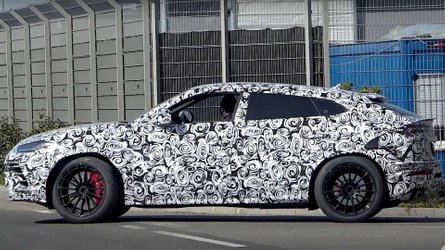 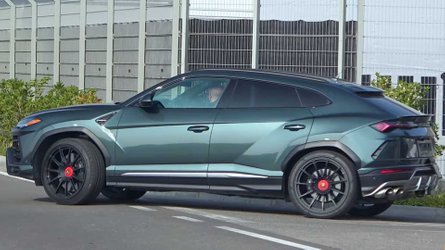 Is This Lamborghini Urus Test Vehicle Riding On Centerlock Wheels?

The updated Urus is expected to continue using the same twin-turbocharged 4.0-liter V8 that’s currently powering the model. It produces 641 horsepower (478 kilowatts) and 628 pound-feet (848 Newton-meters) of torque. Lamborghini isn’t expected to make any significant changes to the powertrain, though a few software updates could tweak how things operate under the hood. The interior could also get a few tweaks, like an updated infotainment system or other minor changes. Lamborghini hasn’t announced when we will see the new Urus, though it's rumored to arrive for the 2022 model year in Europe before going global.