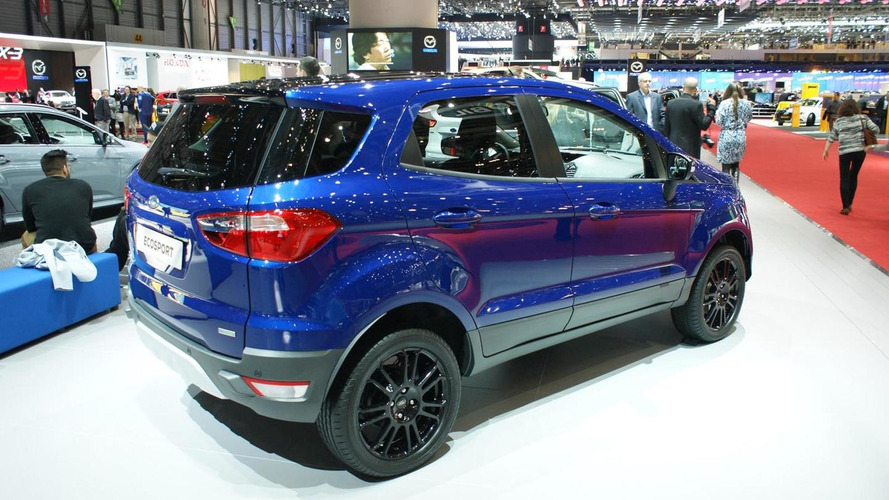 Ford has taken the wraps off the EcoSport facelift which comes without the rear-mounted spare wheel.

Ford has taken the wraps off the EcoSport facelift which comes without the rear-mounted spare wheel.

Our spies caught on camera back in November a prototype of the EcoSport featuring a much cleaner rear end thanks to the spare wheel removal and now Ford has made the news official in Geneva where they are also showcasing a higher specification EcoSport S. Displayed at the Swiss auto show in a Deep Impact Blue paint, the more expensive model gets bespoke 17-inch wheels, black roof and mirror caps, privacy glass and a rear diffuser.

The facelift has brought a plethora of updates for the Fiesta-based EcoSport which promises to provide lower noise, vibration and harshness (NVH) thanks to thicker sound-deadening materials in the dashboard and door while the seals around the pedals are now tighter. Moreover, the petite crossover has gained a color four-inch display, relocated handbrake, partial leather seats standard for Titanium version while a Winter Pack including heated windscreen, mirrors and seats has been added and it also includes rear seat ducting.

The rear-mounted spare wheel is still available as an optional feature while the standard car gets a tire mobility kit instead. Ford's engineers have also retuned the rear twist beam as well as the spring & damper rates while the ride height has been reduced by 10mm. The 2015 EcoSport also comes with optimized Electronic Stability Control and power steering systems as well as sat-nav and a rearview camera which will both be available later this year. Lastly, the entire engine lineup now meets EU6.1 emission standard and the diesel engine has gained an extra 5 HP (3.6 kW).

The revised Ford EcoSport is scheduled to go on sale in June.