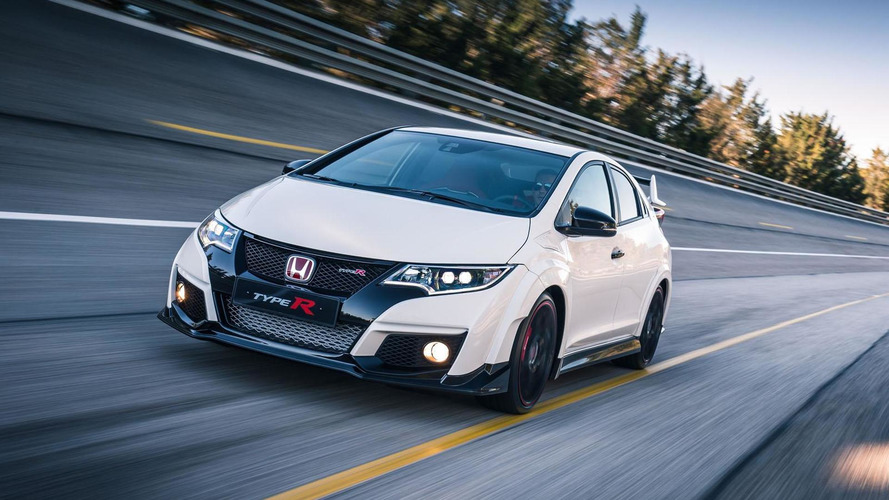 After a long teasing campaign, Honda has finally unveiled the production-ready Civic Type R this week in Geneva.

After a long teasing campaign, Honda has finally unveiled the production-ready Civic Type R this week in Geneva.

Honda has been obsessed lately with the Nürburgring so it shouldn't come as a surprise their latest hot hatchback has managed to take down the front-wheel drive record by lapping the Nordschleife in 7 minutes and 50.63 seconds, thus beating the previous record established by the Renault Megane RS 275 Trophy-R (7 minutes and 54.36 seconds).

It rides on 19-inch alloys wrapped around in 235/35 R19 tires specifically developed for this model while at the back it boasts a quad exhaust system hosted within a massive diffuser. The more aggressive body comes with larger air intakes and a fixed rear wing which unfortunately isn't as spectacular as the one fitted to the concepts.

The front axle hosts Brembo brakes with four-piston calipers matched with 350mm drilled discs and there is also a dual axis strut suspension which Honda says will diminish torque steer by 50 percent compared to the regular Civic. The rear end benefits from a H-shaped torsion beam suspension with a "crushed pipe" assembly which boosts roll rigidity by 180 percent while a four-point adaptive damper system should enable the Civic Type R to be a great track car.

Honda has announced the Civic Type R will hit dealerships this summer at a starting price in UK of £29,995. The more expensive GT version adds £2,300 to the final price tag and brings a plethora of extra kit such as Honda CONNECT infotainment system (with GARMIN navigation), red ambient lighting, front & rear parking sensors, automatic wipers & headlights, dual-zone climate control and others as well.