Over two years in the making, this import from the old country is almost ready for US campers to buy.

It's been over two years since American trailer and truck camper manufacturer NuCamp announced it would be adding the adorable Barefoot to its US lineup. The Barefoot mini camping trailer has been on sale in the UK for a while and US customers were ecstatic about its pending arrival here. But as months turned into years, some were questioning if it would ever happen.

We're now one step closer to being able to buy a Barefoot in the States after NuCamp showed a US-spec prototype of the trailer recently at this year's Hershey RV Show in Pennsylvania. TJ from the YouTube channel Loving Life Hitched Up was the first to shoot a walkthrough video with the prototype, which you can watch above.

This Is How Long Ago It Was Announced: 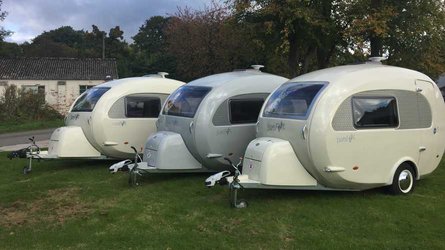 Barefoot's Egg-Shaped Travel Trailers Are Coming To U.S. In 2020

Having watched the video a couple times and compared the prototype with the original Barefoot trailer from the UK, we can tell you that not much has changed. The most visible alteration is on the kitchen counter where the UK version's original combination sink-and-stove unit has been replaced with a separate sink and stove on the US-spec prototype.

The dinette features slide-out legs to convert into a bed, and there's storage under the driver's side of the dinette. That's not the case, however, under the passenger's side and rear seats of the dinette, which both house mechanicals. One neat feature is that the seat cushions snap to the wall so they don't fly around or fall off while towing the trailer.

The only other visible difference we can see is the inclusion of American-style 110-volt outlets instead of Euro ones. Which begs the question, with so little difference between the original Barefoot and this US-spec prototype, what took so long and why isn't it already on sale yet? We've heard reports from NuCamp that COVID really knocked the company off its product schedule, which makes sense. It doesn't help satisfy everyone's eagerness, though, to give this cute little trailer a try.