It's not the elegant Prophecy concept, but it has style.

To those of you hoping that Hyundai would simply stamp the attractive Prophecy concept sedan for production, we have some bad news. It's not all bad – new spy photos show us the Ioniq 6 will retain the overall essence of the concept when it enters production. But it won't be the near-copy many of us were hoping for.

Captured here in 24 high-resolution images, this is easily the best look we've had at Hyundai's EV sedan thus far. And what do we see? Yes, the front and rear overhangs are a bit longer versus the Prophecy, and it rides a bit higher. It also nixes the rear-opening back doors and pillarless design for something more conventional, but though the doors appear to have big handles, we suspect they're really hideaway items like the concept.

Additionally, we think the swoopy body lines are also much closer to the Prophecy than this heavily camouflaged test car would suggest. Take a close look at the rear, specifically the cutouts in the camo for the taillights. Those lenses sit low, and the rear camouflage itself hides a clue in plain sight. A zipper runs from the rear quarter glass down below the lights across the rear bumper. That's likely in place so the trunk can be opened, and it should offer insight into the actual body line, sloping towards the ground. 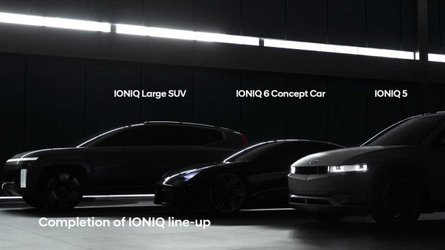 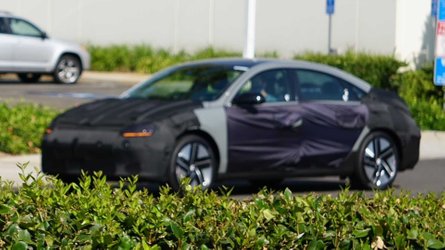 As for the interior and powertrain, we don't have much to go on there. It should share the single / dual-motor options of the Ioniq 5, with estimated ranges of 300 miles for single-motor rear-wheel-drive models. All-wheel-drive versions would have dual motors and an estimated range of 270 miles. At launch there likely won't be any high-powered variant, but with spy shots of an Ioniq 5 N already a reality, there's no reason to believe an Ioniq 6 N with Tesla-rivaling performance couldn't happen eventually.