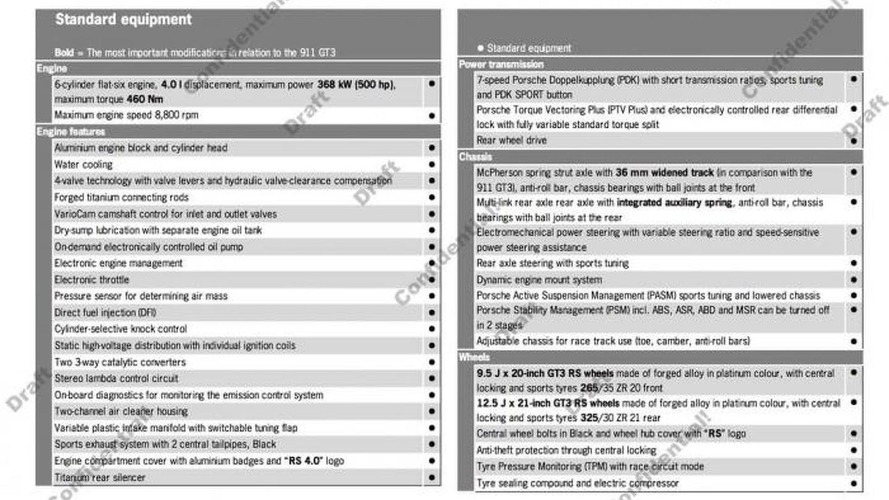 A leaked internal document has revealed all the juicy technical specifications of the highly anticipated Porsche 911 GT3 RS.

A leaked internal document has revealed all the juicy technical specifications of the highly anticipated Porsche 911 GT3 RS.

It turns out rumors were spot on as the Porsche 911 GT3 RS will have 500 HP (368 kW) coming from a newly developed flat-six 4.0-liter engine generating a maximum torque of 460 Nm (340 lb-ft). The motor will work exclusively with a seven-speed PDK gearbox channeling power to the rear axle. It benefits from a Porsche Torque Vectoring Plus (PTV Plus) system and an electronically-controlled rear differential lock with full variable torque split.

It's about 50mm wider at the front and 30mm at the back compared to the 911 GT3 and rides on 20-inch front & 21-inch rear forged alloys wrapped around in 265/35 ZR 20 and 325/30 ZR 21 rear rubbers, respectively. Stopping power is provided by six-piston front & four-piston rear aluminum red brake calipers working with 380mm vented and cross-drilled compound brake discs featuring aluminum brake chambers.

The body is made from aluminum and steel composite while the rear lid, rear wing and full bucket seats are manufactured from carbon fiber reinforced plastic (CFRP). Forged aluminum was used for the air intakes and wings; magnesium for the roof and polycarbonate for the rear and front side windows.

A full reveal could occur as early as next week at the Geneva Motor Show but Porsche could decide to until September for IAA to avoid stealing the Cayman GT4's thunder at the Swiss show.

Special thanks go to WCF reader George for sending us the tip!