Cheapest Classic Lamborghini Countach Up For Sale But There's A Catch

Could be an exciting but painful restoration work. That's up to you.

Lamborghini gifted the world with the Countach LPI 800-4, giving us a modern interpretation of the iconic bull. While some (a lot) aren't exactly convinced by its return, those who are and have the means to purchase one aren't immediately given the ticket to buy one. In fact, the new Countach is already sold out.

So, what do you do? You can turn your attention to the classics, which you can buy at around half a million dollars in the market. However, if that amount of money is too much for you, we've found a cheaper example but there's an obvious catch – it requires full restoration.

Just take a gander at the images below to see what we mean.

There are more photos from the listings at UK's Historics but at this point, you know what you're dealing with in case you're interested.

This particular unit is a Lamborghini Countach LP500 S, also known as the 5000 S. It's an update to the supercar in 1982, with a bigger engine and a better interior. Obviously, the latter's non-existent in this example, which requires massive restoration work. According to the listing, the car was okay until 2008 "when it was put into a body shop for a full strip and respray along with interior refurbishment." Unfortunately, the company that was working on it got wound up, leaving the car at its current state.

If Replicas Are Your Thing: 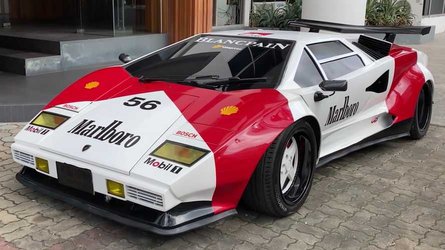 The seller said that the car is complete, including a new windshield plus the parts that were removed. Practically, it's more of assembly work, but we all know that that's easier said than done, especially when working with these classics. Good thing, it only has 61,840 kilometers (38,426 miles) on the clock.

Historics estimates that this Countach could go for up to £180,000 or around $250,000. If you're interested, well, there's the source link below. Success of restoration not guaranteed.