An all-electric version is also in the cards.

The refreshed BMW 3 Series returns in new and more revealing spy photos taken on public roads in Germany. This prototype was caught on camera by our spies, and showed more of its revised exterior, especially at the front. Still, camouflage foil hides the little details but at least we can take a look at the overall picture.

And, judging by this early look, things are looking good. The radiator grille of the facelifted 3 Series remains unchanged in terms of dimensions compared to the current model, though the headlights seem to be slimmer and featuring new LED daytime running lights. The lower section of the bumper will probably get newly designed air intakes, and the lower grille pattern could be changed depending on the trim level.

While the rear end will be very similar to the outgoing sedan - the only little differences are expected in the taillights design, the interior will be the place where the biggest improvements are expected. Earlier photos indicated the 3 Series LCI will get the curved display that debuted with the iX and is making its way into other BMW products now. Elsewhere, additional wheel options and new exterior colors are expected to round off the visual touches.

This particular prototype of the model is powered by a plug-in hybrid powertrain, and we expect the combustion-powered and hybrid engines of the model to carry over without significant improvements. The biggest news regarding the engine family of the 3 Series facelift will be the addition of an all-electric model. Likely based on the Chinese version due to its longer wheelbase, the electric 3er could be a global product complementing the model’s already wide engine family, consisting of gasoline, hybrid, and diesel units.

Set the make its official debut in the early months of next year, the refreshed 3 Series should go on sale in Europe in the summer of 2022, which means it will likely arrive in the United States as a 2023 model.

Refreshed 3 Series Spied Inside And Out: 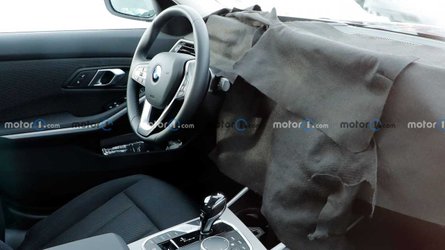 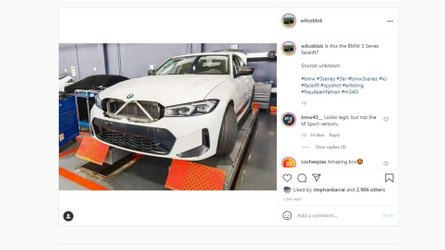 2023 BMW 3 Series Facelift Spied Without Camo To Reveal Normal Grille
By: Angel Sergeev
++
Got a tip for us? Email: tips@motor1.com