UPDATE: The Nürburgring has released an official press release confirming the Model S Plaid's lap record for electric vehicles. You can read the announcement here. It confirms Andreas Simonsen as the driver. He lapped the 20.8-kilometer layout of the track in 7:35.579 minutes and hit a top speed of 279 kph (173.4 mph).

Elon Musk announced on Twitter that the Tesla Model S Plaid has set a new record for a production electric vehicle on the 12.8-mile (20.6-kilometer) course of the Nurburgring. A post on social media reveals the EV sedan, in completely stock form, lapped the German track in 7 minutes and 30.909 seconds with an average speed of 103 miles per hour (166.32 kilometers per hour).

The record run was registered yesterday and Musk’s photo on Twitter shows a second time of 7 minutes and 35.579 seconds, which is probably related to the slightly longer course of the track (0.14 miles/230 meters longer). Tesla also released an official onboard video from the Model S Plaid, and we’ve also attached another video from Touristen Niko on YouTube, who captured the car on camera at a few different locations around the track (see below).

With the new time, the electric sedan from Tesla is beating the previous record for a production EV on the Nurburgring set by the Porsche Taycan Turbo back in August 2019 (7:42 minutes). It’s safe to say Tesla’s journey to the new record hasn’t been exactly smooth, though, as earlier this month a Model S Plaid crashed on the Nurburgring, probably in an attempt to reach its maximum potential.

While it’s an impressive result for a production EV - Musk mentions the car was completely unmodified, including the tires - the 7:30.909 minutes time is way behind many combustion-powered performance cars, albeit with two doors. Most recently, in June this year, the Porsche 911 GT2 RS with an upgrade kit from Manthey Racing lapped the 12.8-mile (20.6-km) course of the Nurburgring in 6:38.835 minutes.

As a final note, Musk announced on Twitter the next step for the EV "will be modified Plaid with added aero surfaces, carbon brakes & track tires (all things that can be done without Tesla being in the loop)."

The Model S Plaid At The Nurburgring: 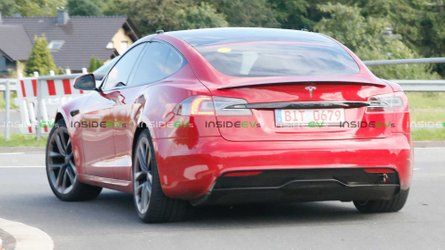 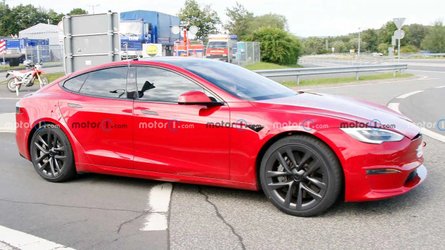