If you could take on a Formula 1 car, would you? Motorsports fans daydream about it constantly. However, most of those fantasies are completely divorced from reality, where physics, road conditions, and a 1,000-horsepower F1 machine have no bearing on our victory. Fortunately, the Carwow YouTube channel put all those ludicrous visions to bed when it pitted a Porsche 911 Turbo S and a BMW M 1000 RR against the 2011 Red Bull F1 car in a drag race.

Introduced in 2021, the M 1000 RR improves on BMW’s lauded S 1000 RR superbike with extra power, more torque, reduced weight, better brakes, winglets, and a slew of carbon trinkets. At 423 pounds, the raucous Beemer churns out 83 lb-ft of torque and 212 horsepower. That’s a power-to-weight ratio of 0.5 hp/lb.

As Red Bull’s 2011 championship-winning RB7 race rig, the car on display is using a decade’s old technology, but it’s lightyears away from current Formula 1 technology. Equipped with a 2.4-liter, naturally aspirated V8 that produces a measly 750 horsepower (by current F1 standards). At only 1,433 pounds, the series-winning car boasts a .52 hp/lb ratio.

With all the figures calculated, the competition might seem like a two-horse race. However, races are run on racetracks, not paper, and the real-world results tell a much different story. From a stop, the F1 easily outruns the field, with the M 1000 RR eeking out a runner-up finish by the slimmest of margins.

From a rolling, second gear start, the Beemer fares much better reeling in the F1 machine while both pull away from the Porsche. In the end, the F1 car still emerges victorious. The final test includes a rolling start from third gear, but the one-mile competition ends with each vehicle finishing in the same slot.

While the results were expected, we have to put things into perspective. The BMW and Porsche are production models taking on a race-bred prototype. The M 1000 RR commands $32,495 and the Porsche 911 Turbo S retails for $207,000 while the F1 machine costs around £62.5M ($86M) to develop.

Of course, if Red Bull rolled out the 2021 RB16B, the results would have been even more disparate. That doesn’t mean that gearheads out there still wouldn’t take on a Formula 1 car if they could. Now, they just know how big of a gap to expect at the finish line. 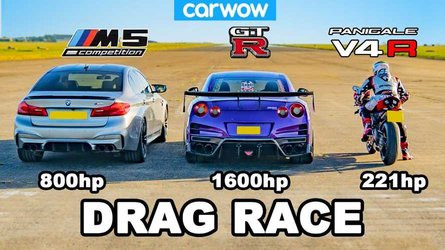 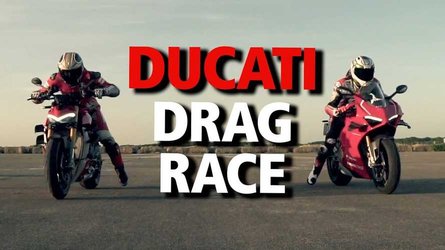