When in doubt, upgrade.

The current-generation Lexus ES sedan isn't what you'd call inspiring. It received an ever-so-slight visual update for 2022, and it's certainly packed with technology inside. There isn't really anything wrong with it, but among a modest selection of sedans in the $40,000 to $50,000 range, it doesn't stand out. Or rather, it doesn't stand out for the right reasons. We're looking at you, spindle grille.

The ES isn't supposed to be a sexy sports sedan. That's what the IS is for, but that doesn't mean the ES needs to wither into anonymity like so many other Lexus offerings. Perhaps that's why Toyota's snazzy TRD group now offers some visual upgrades for the ES. Thankfully, you won't find gobs of wings and vents that so often go too far in the other direction. Instead, we find a collection of components that offer a little more visual appeal without getting all shouty about it. 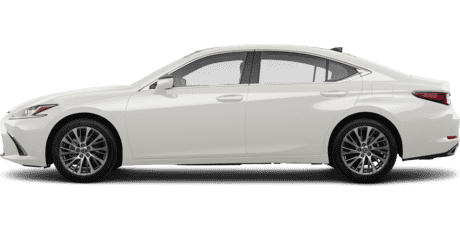 What's available for the ES? Basically, you can get a low-key body kit that adds a front spoiler, side skirts, and a rear diffuser. Aerodynamic mirror covers can be purchased, and cool new spoked wheels in 19-inch or 20-inch sizes are available. The interior isn't forgotten either, thanks to overlays for the door switch panels on the side armrests. All items can be had separately, so if you just want a subtle chin accentuating the lower fascia, simply get the front spoiler. Curiously, TRD doesn't offer any rear spoiler at present for the ES. That's not necessarily a bad thing.

There are other items that could alter performance just a tad, and we do mean a tad. Underbody braces are offered for improved stability, and at the back, you can get a pair of sport mufflers. TRD doesn't mention any power increases or changes in sound with the muffler upgrade, but they are required if you opt for the rear diffuser. That's because it changes the lower rear fascia, doing away with the trapezoid design in favor of proper quad exhaust tips. It's arguably the best TRD upgrade on this shortlist of equipment.

Speaking of the list, it's important to note that these upgrades are listed on TRD's Japan website. As such, they are intended for use in the Japanese market so prices and availability in other parts of the world are unknown. Still, at least TRD is thinking about the ES, so even if current availability is limited, it likely won't stay that way for long.