The front looks low and wide.

Audi is laying the foundation for its electrified and semi-self-driving future with a trio of concepts – the Skysphere, the Grandsphere, and the Urbansphere. Audi has already revealed the Skysphere, and the company is gearing up to debut the Grandsphere later this week – September 2. A new teaser further fleshes out the concept, showing off the car’s front end and sleek headlight signature, though design details remain shrouded in silhouette.

We’ve seen a lot of the concept already. Last week’s Grandsphere Concept teaser provided a top-down view of the large sedan. The new teaser shows off a lit-up Audi badge sitting between a pair of thin-slit headlights that look like cat eyes. The silhouette also reveals the car wearing wing-like side-view cameras – a neat innovation that continues to face regulatory hurdles in the US.

The Grandsphere Concept is designed with Level 4 autonomy systems, which means it’s still equipped with manual controls, but the concept’s primary function is to ferry passengers to their destination in comfort. An earlier teaser revealed a cavernous interior and a pillarless entry – something made more possible thanks to its electrified powertrain – though the new teaser doesn’t show off any of that. The Grandsphere looks low and wide, making it easy to draw comparisons between it and the Audi A7 Sportback. However, we’re eager for a clear look at the concept to see how it differs.

Check Out The Other Grandsphere Teasers: 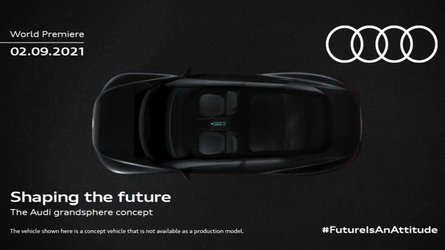 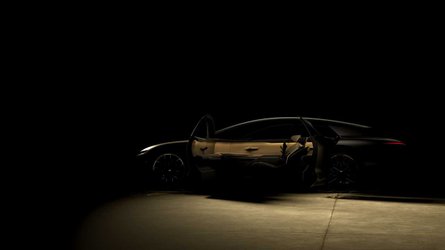 Audi will reveal the Grandsphere Concept on September 2 before the car makes its public debut at the Munich Motor Show, which kicks off next week. The concept is part of the brand’s tech-infused mobility concepts designed to preview Audi’s high-tech, luxurious future. The Grandsphere feels a bit more realistic than the transforming Skysphere concept that debuted earlier this month, which has the ability to adjust its wheelbase. That sort of tech looks absent on the Grandsphere, though we’re excited to see how Audi imagines the future of driving – or, uh, riding.