It was being benchmarked against a Volkswagen ID.4.

Renault has been using the "Megane" nameplate since 1995, and in this timeframe, it has slapped the badge on virtually any conceivable body style: hatchback, sedan, wagon, minivan (Scenic), coupe, convertible, and SUV. You might have a difficult time identifying the latter, but the Arkana coupe-SUV is sold in some markets as the Megane Conquest "due to negative connotations with the Serbian historical war criminal Arkan," per Wikipedia.

It's almost time for yet another body style to get the Megane moniker, and this time around, it'll be an all-electric compact crossover serving as a sister model of the Nissan Ariya. It will be officially revealed next month at the IAA Munich show in Germany, and in the meantime, a near-production prototype was caught undergoing final testing. Spied in southern Europe, the MeganE was being benchmarked against the Volkswagen ID.4, one of its main rivals.

Seeing the EV from Wolfsburg behind helps us realize Renault's zero-emissions crossover has a considerably sharper design and looks less bulbous than the ID.4. Some would argue it's more along the lines of an oversized hatchback rather than a true crossover, much like we've heard a lot of people describe the Hyundai Ioniq 5.

The new MeganE was previewed back in October 2020 by the Megane eVision and has since evolved to a pre-production car as denoted by the white sticker at the base of the A-pillars. The white lettering on the front fenders also shows the prototype had a 60-kWh battery pack and a 160-kW electric motor to mirror the concept before it.

Short front and rear overhangs are signs of a dedicated EV platform, and much like the new wave of electric vehicles, the MeganE has electronic pop-out door handles for better aero to improve efficiency. The pre-production vehicle proudly carries the updated diamond logo, which is quite large at the front where it flanks slim headlights with separate daytime running lights featuring a funky shape.

Or Would You Prefer The Old-School Megane? 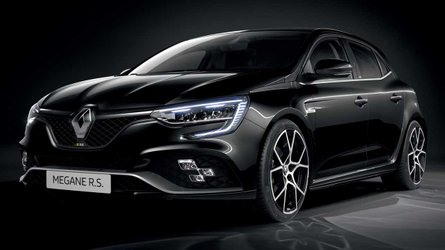 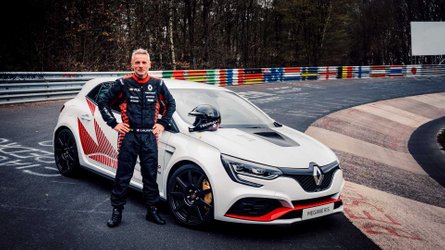 A closer look reveals the MeganE has rear disc brakes, which is something we can’t say about the ID.4 and its Skoda Enyaq and Audi Q4 E-Tron siblings as all boast drum brakes at the back. Underpinned by the CMF-EV platform, Renault's newest ICE-less vehicle rides on large wheels and hides the rear door handles in the quarter glass.

Because the roofline is significantly sloped towards the rear where it meets a chunky spoiler, the rear window is quite small for a compact electric crossover. The button to open the tailgate sits below the "Megane" logo and appears to have been sourced from the gasoline- and diesel-fueled Megane sedan. As with other recent vehicles, a full LED light bar extends across the entire tailgate to meet the main taillights.

Our spies weren't able to take a peek inside the cabin, but previous teasers published by Renault showed a dramatic change over the traditional Megane models. It will have two side-by-side digital displays, with the infotainment's touchscreen extending lower on what will be a "floating" center console.

Thankfully, Renault has fitted a row of physical buttons under the big display, providing quick access to several functions. Right below that stack of controls will be a wireless charging pad, while the bottom level will provide a storage area and access to cup holders. The MeganE will feature LED ambient lighting and that fake continuous air vent design we've seen in VW models.

Following its official reveal in the coming days, the Renault MeganE will go on sale in Europe in 2022.