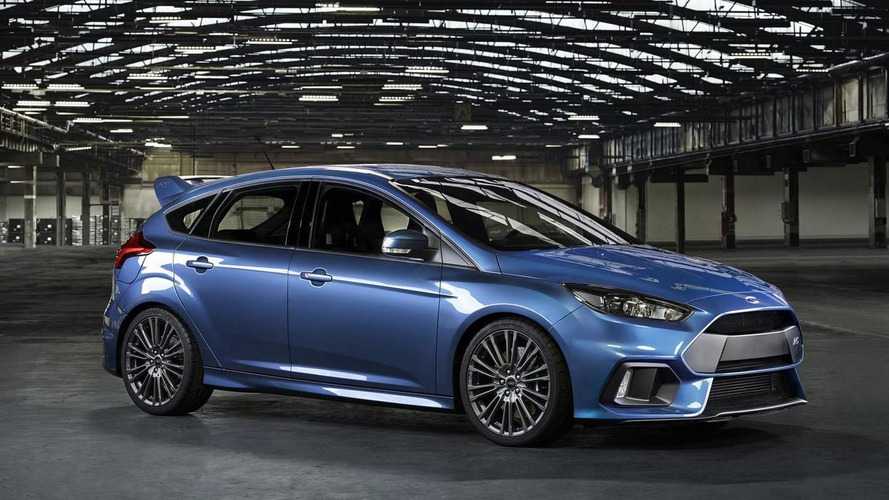 Following this morning's massive leak, Ford has officially taken the wraps off the long-awaited Focus RS.

Following this morning's massive leak, Ford has officially taken the wraps off the long-awaited Focus RS.

Let's cut to the chase and start by saying the third-gen Focus RS is powered by the Mustang's four-cylinder 2.3-liter EcoBoost turbocharged gasoline engine which in this application delivers more than 315 bhp (235 kW). An exact torque figure has not been specified but Ford says they had to update the six-speed manual gearbox in order to cope with the additional torque compared to the Mustang which has 320 lb-ft (433 Nm).

All that power is sent to an all-wheel drive system benefiting from dynamic torque vectoring control which promises to provide "a new level of handling capability and driver enjoyment." The AWD system uses two electronically-controlled clutch packs on each side of the rear drive unit and can send up to 70 percent of torque to the rear axle. Depending on situation, up to 100 percent of the available torque can be channeled to each rear wheel.

The Ford Focus RS comes as standard with 19-inch alloy wheels wrapped around in 235/35 R19 tires provided by Michelin. The standard rubbers are Pilot Super Sport but for more money clients will be able to opt for Pilot Sport Cup 2 tires.

Another important feature is noticeable at the back where Ford has installed a high-performance large-bore exhaust system with dual pipes and an electronically-controlled valve in the tailpipe in charge of optimizing noise output and the balance of the back pressure.

On the inside it has received a series of upgrades such as the Recaro sport seats, an eight-inch SYNC infotainment system which can work with a rear view camera (with park distance control) and a 10-speaker Sony sound system. Also new is the flat-bottomed steering wheel covered in leather, along with alloy pedals, bespoke instrument graphics and the extra bank of gauges above the center console from where the driver can check out oil pressure, oil temperature and boost pressure.