The third-person view makes it look like a real-life Forza game.

Remember the spectacular footage from earlier this month with a Mazda RX-8 shot in third-person view? Well, if you enjoyed the video game vibe, we've got a treat for you as a similar clip shows a BMW 7 Series in a real-life Forza scenario. It's the luxobarge's second generation (E32) in 735i guise, coming from a time when badges actually meant something rather than a combination of letters and digits loosely related to the model and engine displacement.

Come for the car, stay for the scenery as the roads of Slovenia are surrounded by breathtaking views provided by our Mother Nature. If you're wondering how the video was shot, there's a GoPro MAX installed at the end of a pole mounted on the sedan's trunk lid. It goes without saying the long stick has been edited out to make the video more enjoyable without the bar right in the center.

A Blast From BMW's Past: 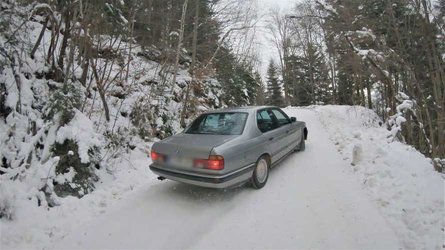 Snow Drifting BMW E32 735i Is Your SUV Antidote

After GoPros mounted in front of the instrument cluster for top speed runs on unrestricted sections of the Autobahn, it looks like this type of content is the next YouTube sensation. It's a great idea, as long as the driver obeys the laws at all times, which wasn't entirely the case throughout this eight-minute video.

As for the car, it appears to look and run great despite being way past its prime. As a refresher, the E32 was available from 1986 to 1994, and this 735i had a straight-six 3.5-liter engine producing a little over 200 horsepower and a smidge over 300 Newton-meters of torque. BMW sold the 735i with both manual and automatic transmissions.

The E32 will go down in history as the first BMW production car with a V12 engine, but some will remember there was also a bonkers Goldfish prototype aka Secret Seven with a gargantuan 6.7-liter V16. That’s certainly a car we would love to see in a video like this, with its side vents flanking the cooling system where there used to be a trunk.