The EcoBoost takes a hit compared to the 40-mpg hybrid variant.

Ford revealed the Maverick earlier this summer, and one of its standout features was its 40-miles-per-gallon highway rating. That’s achievable with the hybrid powertrain, though fuel economy details about the other engine remained elusive until now. A new MaverickTruckClub.com post reveals a window sticker of a 2022 Maverick equipped with the 2.0-liter EcoBoost and the 4,000-pound (1,814-kilogram) tow package that shows its fuel economy rating.

According to the document, the Maverick with the upgraded engine and tow package will return 22 mpg in the city and 29 on the highway. However, these don’t appear to be EPA-certified just yet, so they could change before Maverick production begins later this year. These look like Ford’s targets, according to the poster. Still, those are solid numbers for the new truck in one of its most capable configurations. EcoBoost Maverick’s without the Tow Package could break the 30-mpg highway barrier, too.

The entry-level Maverick with the hybrid powertrain is no slouch, capable of towing up to 2,000 lbs (907 kgs), which is enough for a pair of personal watercraft or a small tent trailer. Every Maverick has a 1,500-lb (680-kg) payload rating, which makes the truck quite a compelling offer to many. The Maverick, which combines affordability and practically at a time when consumers are flocking to such vehicles, gives Ford one of its most robust truck lineups for the first time in over a decade. 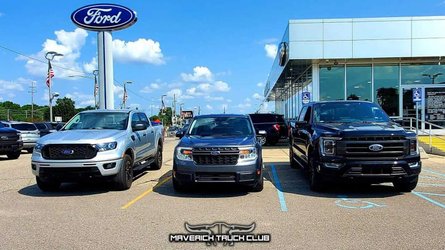 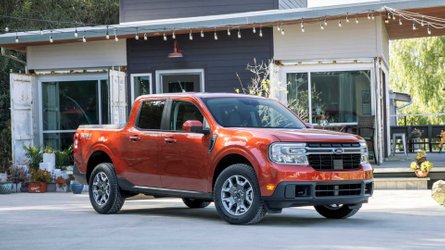 Ford Maverick Hits 100,000 Reservations, Most Are From Three States

So far, Ford has received about 80,000 reservations for the compact pickup, which is set to become one of the brand’s most affordable offerings, and one of the cheapest hybrids available on the market. Maverick production is expected to begin this fall. However, new vehicle production isn’t having the best of time right now with the ongoing chip shortage and other supply constraints caused by the coronavirus pandemic.