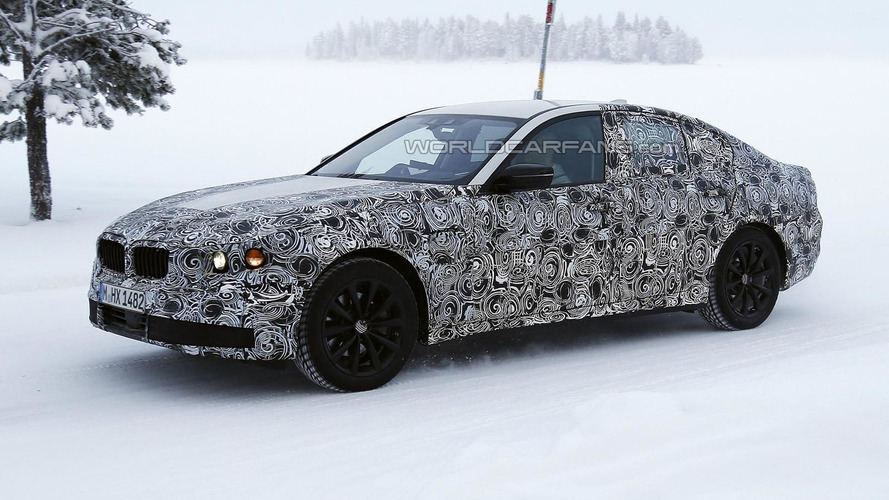 The next generation BMW 5-Series has been spied once more testing near the Arctic Circle ahead of an expected reveal next year.

The next generation BMW 5-Series has been spied once more testing near the Arctic Circle ahead of an expected reveal next year.

BMW is currently putting the finishing touches on the flagship 7-Series but at the same time they are testing its smaller brother, the 5-Series. Both of them are sharing the newly developed "35up" platform and in the case of the "5" it should bring a significant 100 kg (220 lbs) diet as a result of mixing up lightweight materials such as carbon fiber and aluminum.

The design won't be that much different compared to the current model as BMW has decided to make only evolutionary changes in the same vein as the styling differences between the new 7-Series and the outgoing model. This particular prototype has an additional fuel cap in the left front wing which indicates the mid-size executive sedan will be available in a more frugal plug-in hybrid version with possibly a 4-cylinder 2.0-liter turbodiesel, an electric motor and a lithium-ion battery providing a combined output of 245 HP & 400 Nm.

A quad turbo engine is expected to reside in an M550xd model where it will develop around 408 HP & 750 Nm while the range-topping M5 will get as much as 626 HP (460 kW) and an optional xDrive all-wheel drive system. At the other end of the spectrum, there are rumors of a new entry-level packing a three-cylinder 1.5-liter turbodiesel sourced from the 2-Series Active Tourer although it’s hard to believe it will actually happen especially taking into consideration the upcoming smaller 3-Series facelift is unlikely to receive the motor.

It is believed the new 5-Series will go on sale in July 2016 and will be followed in November of the same year by the Touring version. The oddball GT will make a comeback in 2017 primarily because for some reasons it's popular in China.