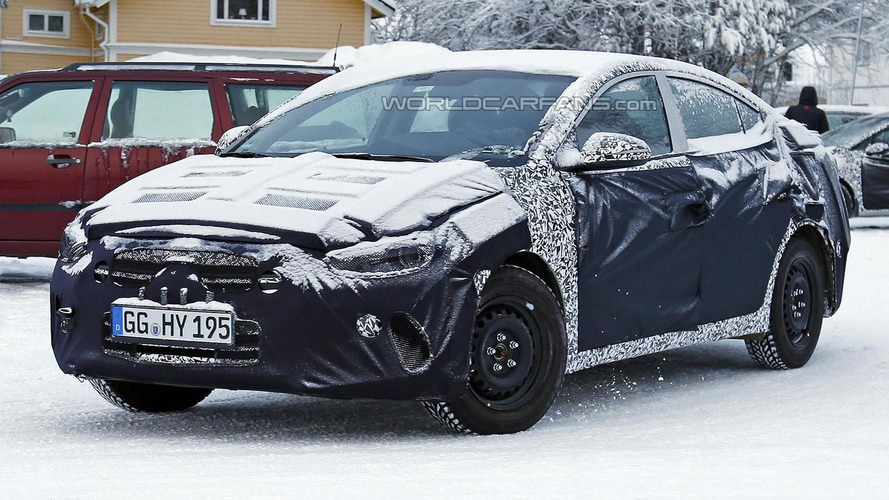 Hyundai's next-gen Elantra has returned in an additional batch of spy images and just like before the prototype was fully camouflaged.

Hyundai's next-gen Elantra has returned in an additional batch of spy images and just like before the prototype was fully camouflaged.

The fifth generation Elantra is on its way to retirement after being introduced back in 2010 and its successor is hiding underneath the camouflage ahead of an expected launch later this year with Hyundai's latest design language called "Fluidic Sculpture 2.0". Keeping just about the same dimensions as the outgoing model, the new Elantra (Avante in South Korea) is going to adopt an evolutionary design with influences from the i30 facelift and other recent Hyundai models.

The sloping roofline will be retained while up front the bumper will host LED DRLs strips on its side. The hexagonal front grille will likely be similar to what the larger Sonata and Genesis have while the side profile appears to be similar to today’s model.

In terms of motorization, the 2016 Hyundai Elantra (codenamed "AD") will be commercialized with an array of improved gasoline direct injection (GDi) engines and some of them will benefit from turbocharging. There's also going to be a couple of CRDi turbodiesels and an economical plug-in hybrid variant and possibly a fully electric derivative.

An official reveal of the new 2016 Hyundai Elantra will occur in the second half of this year.