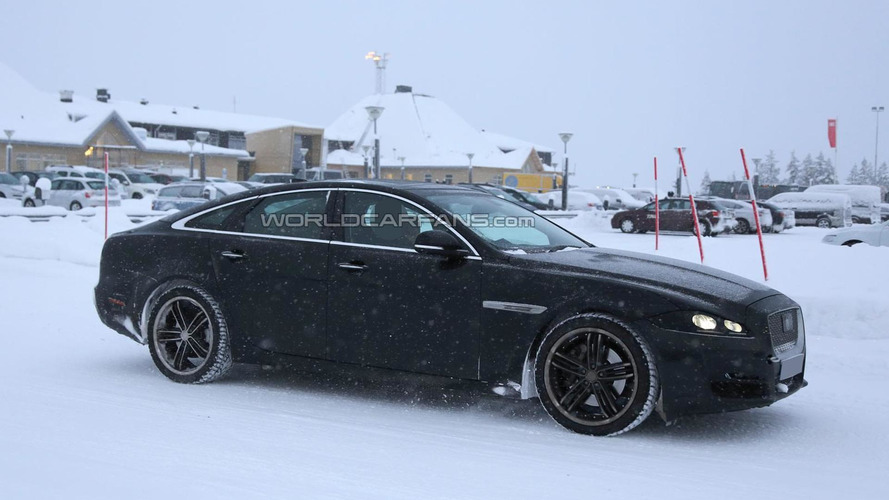 A lightly camouflaged prototype of the Jaguar XJ facelift has been spied while undergoing last-minute testing.

A lightly camouflaged prototype of the Jaguar XJ facelift has been spied while undergoing last-minute testing.

The current generation XJ (codenamed "X351") went on sale in 2010 so Jaguar is trying to rejuvenate its flagship model with a modest facelift which will be out in the months to come. The prototype spotted here winter testing was wearing disguise only on the headlights and taillights indicating some changes to the cluster graphics while the front and rear bumpers are also mildly revised.

The engines will likely be carried over from the current variant but Jaguar could decide to offer a plug-in hybrid variant as previewed back in 2012 by the XJ_e prototype. The vehicle mixed up a conventional four-cylinder 2.0-liter turbo with a 69 kW electric motor, 8-speed automatic transmission and a 12.3 kWh lithium-ion battery providing a combined output of 334 HP (245 kW). The hardware setup granted a 0-62 mph (0-100 km/h) run in less than 6.5 seconds and an electronically-capped 150 mph (250 km/h) top speed. The prototype was able to cover 25 miles (40 km) on electric power and consume 3.2 liters / 100 km (87 mpg UK or 72.4 mpg US) when used as a hybrid.

This revised version will be sold until 2017 or 2018 when Jaguar will introduce the next generation XJ bound to receive a radical design which "will be a bit of a jolt, but will work for people", according to sources close to Jaguar.