Acadia SLE with the turbocharged 2.0-liter engine is now the entry-level model.

GMC quietly made some changes to trim levels and equipment on the 2022 Acadia. According to GMC's website, the entry-level Acadia SL is no longer available. Now, the starting point for Acadia shoppers is the SLE model, and as you'd expect, it's considerably more expensive. Instead of starting at $30,100, the cheapest Acadia now sets you back $34,800, and that's before $1,195 in destination charges.

For the record, that's a $4,700 base-price increase for 2022 but of course, you're also stepping up a trim level. Additionally, the 2.5-liter four-cylinder engine is gone, leaving buyers with the turbocharged 2.0-liter mill as the only choice for the SLE. The good news there is that it's offered with front-wheel drive, whereas previously you had to jump all the way to an Acadia SLT if you wanted the turbo-four turning just the front wheels. In addition to having more horsepower (228 versus 193), the 2.0-liter engine is also slightly better on gas with a combined EPA rating of 24 mpg. 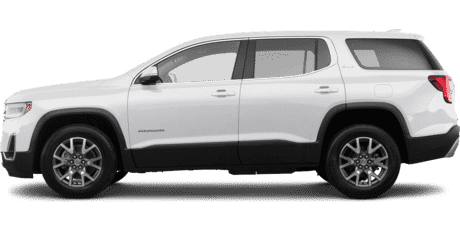 It's impossible to make a direct year-over-year comparison for the SLE as the 2.0-liter turbo wasn't previously offered, but comparing the 2.0 with the prior-year 2.5, we see the 2022 SLE is $900 more. That's not a terrific jump considering the power boost, and we see no price increase for either the SLT or AT4 trim. Curiously, GMC's website advises buyers interested in a 2022 Acadia Denali to contact a GMC dealership for pricing.

The Latest On SUVs From GM:

2023 GMC Canyon AT4X Rumored To Sit Above AT4 Trim

The Acadia is GMC's second-best-selling SUV behind the Terrain, but Acadia sales took a hard hit in 2020 with a year-over-year drop of 27 percent. The COVID-19 pandemic certainly had a hand in that, but it still suffered the biggest drop in GMC's lineup save for the ancient Savana full-size van. We don't have a breakdown of Acadia sales by trim level, but such entry-level models often serve as price-point bragging items for automakers while garnering very few buyers. It's certainly not the first time we've seen such base trim levels axed from a model lineup.