[UPDATE] SSC North America founder and CEO Jerod Shelby has issued a new statement in an e-mail sent to Motor1.com:

"When I made my personal statement in October 2020 about the events that transpired after our initial reported record speeds, I believed we had made it clear that we did not stand behind those original speeds after new evidence challenged what we believed we had accomplished.  In that October video statement, I acknowledged that we were unable to validate the claimed speeds and that we were unable to correlate the speeds between the GPS and the video. That is the moment we vowed to re-attempt the top speed runs in an open, transparent, and redundant way. There was a genuine mistake in how the capturing equipment was setup. We did not lie about the numbers and there certainly was no ill-intent or awareness of the mistake when we initially released the speeds. We truly believed we had initially hit those speeds, but when the achievement came into question and we dug into the discrepancies that we saw, we knew we could not validate our speeds in any way so we knew the only choice we had was to put October behind us and prepare to re-run for the record in a much different manner.

Over the course of the last several months, we have seen stories, posts, and comments that are contradictory to our retraction of our 300+ mph claims. This has not sat well with us, especially considering the immense amount of time and effort we have been putting into achieving what we believe the Tuatara is capable of in an open, transparent, and redundantly validated way we hope will redefine the standard for other manufacturers. Our recent social media post is a reflection of our commitment to ensure the car community’s trust is in our best interest, and that we do not intend to let false claims stand. The reception of our statement has certainly gained more attention than we anticipated, as we have believed our stance has been understood by the public for nearly 9 months. This does not seem to be the case, and we are committed to learning from our mistakes while also focusing on the exciting future ahead. We look forward to continuing to step up our top speed efforts in the coming weeks in the same open, transparent and validated manner that we did in January. We also want to thank all of those who were supportive and understanding of our unexpected incident in April that delayed our April record attempt."

It didn't take long for eagle-eyed viewers to notice discrepancies in the footage released by SSC, casting doubt on the Tuatara's alleged record-breaking run. Fast forward to January 2021, a new run meant to clear the air ended with the car averaging 282.9 mph (455.2 km/h) after going 279.7 mph (450.1 km/h) and 286.1 mph (460.4 km/h), respectively. SSC has now admitted it has yet to break the 300-mph barrier, but promises to make things right with its next top speed run attempt.

In a statement issued on Instagram, SSC said: "We would like to acknowledge officially that we did not reach the originally claimed speeds of 331 mph or even 301 mph in October of 2020."  The company says it was "truly heartbroken" by its incapacity to crack 300 mph, but aims to achieve its goal "transparently, officially, and undoubtedly" with a new run.

The attempt was supposed to happen earlier but SSC's plans were foiled in May by a crash involving a car carrier that was carrying the Tuatara at the moment of impact. Company founder and CEO Jerod Shelby told Muscle Cars and Trucks earlier this week they've "recovered from this accident, and we're in the process of setting up a 300-mph run currently." 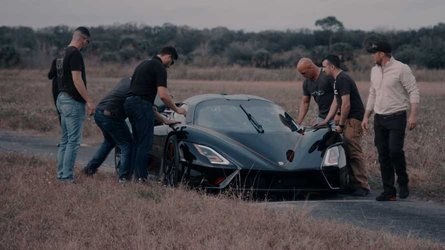 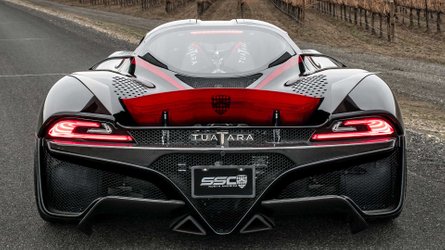 While SSC is preparing for a new attempt, Hennessey and Koenigsegg are likely doing the same with their Venom F5 and Jesko Absolut, respectively. Bugatti has gone on record to say it's done chasing records, so the Chiron Super Sport+ with its 304-mph run (in one direction) marks the end of a chapter for the Molsheim brand, now in cahoots with Rimac.