Featured here are the GT Line and GT versions. 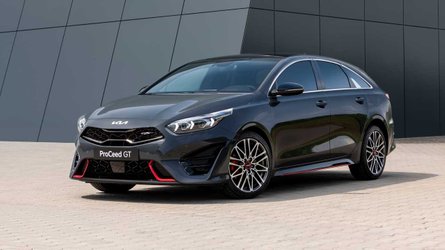 The third-generation Ceed has been around for a little over three years and Kia is ready to give its compact car a nip and tuck. Ahead of tomorrow's premiere, the Korean brand has released a disappointingly low-res image showing three different flavors of its VW Golf competitor. From left to right, we're dealing with the ProCeed GT swoopy wagon, Ceed GT Line hatch, and the Ceed conventional wagon with a plug-in hybrid setup and GT Line spec.

Both these upper-end trims have a glossy black trim on the extremities of the front bumper to give the illusion the faux air vents extend onto the side. We are not particularly fond of this look and we're hoping the lesser trim levels will have a different front bumper / air vent design. The front grille has a new look and we're getting the impression it features a blocked-off design, at least in the case of the GT Line.

Kia has also tweaked the headlights as the four-point LED arrangement à la Porsche appears to be gone. The front lighting clusters likely have the same shape as before, with only the inner bits changed for the Ceed's mid-cycle facelift. As before, the flagship GT wears some red accents on the bumper and sides to denote it's the sporty version. Naturally, all three cars get the company's revamped logo.

The only body style missing from this image is the crossover, which is likely a sign the XCeed will arrive at a later date. That would make sense seeing as how the SUV-ified hatchback was introduced only two years ago. The updated Ceed flavors we will be seeing tomorrow are likely going to have some mildly revised taillights and possibly a slightly different look for the rear bumper, but nothing to write home about.

Kia has been updating the current Ceed and therefore we are not expecting any major changes on the inside. The same holds true for the engines as the cars have already received the new 1.5-liter turbocharged gasoline engine with 160 horsepower to replace the lesser 1.4-liter mill.