Are potential Chevrolet Corvette buyers cross-shopping against the BMW M4 Competition, and vice versa? The two cars are comparable in power, they both send that power rearward through eight-speed automatic gearboxes, and they both weigh around 3,700 pounds. Of course, the 'Vette is a mid-engine two-seater at a lower price while the Bimmer is a front-engined four-seat grand tourer. Similar, but decidedly very different in execution.

Still, the stats suggest these two performance machines are evenly matched in a contest of straight-line speed. That's what the crew at Edmunds decided to do, embarking on a series of standing start and roll races to compare the punch from each car. To refresh your memory, the Corvette pumps out 495 rumbling horsepower (369 kilowatts) the old-fashioned way with a naturally-aspirated 6.2-liter V8. Nestled behind M4's big grille is a boosted 3.0-liter inline-six that, in Competition spec, generates 503 hp (375 kW).

Curiously, rumors have circulated since both vehicles debuted that each could be underrated from the factory. That holds especially true for the M4, which generated some surprising numbers during chassis dyno pulls. On the flip side, the Corvette with its rear-biased weight distribution and tight gearing gives it a considerable traction advantage, evidenced by its official 0-60 time being over a half-second quicker than the M4 Competition.

Drag Race Everything, All The Time: 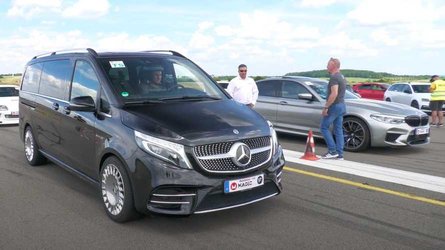 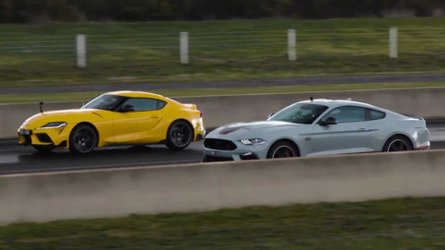 Does the real-world performance of these two cars match up to their respective stats? Two dig races and two roll races certainly suggest as much, provided the drivers don't jump the gun off the starting line. From a dead start, the C8 does indeed take the lead. However, the BMW's impressive thrust once moving supports conspiracy theorists who say the M4 packs more power than advertised.

As such, the BMW absolutely dominates the Corvette from a roll despite having just an 8-hp advantage on paper. Can the C8 claim a drag racing victory from a dead start? We'll say this much about the action: it's about as close as you can get.