It's a polarizing look, but not because of the XXL grille.

It's safe to say BMW's designs have been controversial as of late. Whether it's because of the increasingly larger kidney grilles or the awkward taillights of the new 2 Series Coupe, the Internet consensus is the Bavarians are on a downward path in terms of styling. As always, sales figures will tell the real story as to whether the radical styling changes will negatively impact customer demand.

Get ready for another polarizing design, one that's being prepared for a facelifted model rather than a next-generation vehicle. To bring the X7 in line with the future 7 Series and X8 / XM, BMW will give its Mercedes GLS competitor completely new headlights – as denoted in our recent batch of spy shots depicting a prototype with slightly less camouflage.

The imagery has now been repurposed for a speculative rendering of the X7 facelift with its atypical headlight arrangement. Bear in mind it’s not an extremely rare sight as some Citroën models have had this layout for a while, with the 2013 C4 Picasso springing to mind. Fast forward to 2021, there are quite a few models with the LED daytime running lights positioned above the main headlight cluster, including the Skoda Kamiq.

It would seem BMW is going for the same look with the X7’s impending mid-cycle updates and its next-gen fullsize vehicles, for better or for worse. Facelifted models rarely go through these in-depth changes, but the German premium marque appears to be determined to make its luxobarge stand out. We will admit the very much unofficial rendering looks wild at a first glance, but check out the spy shots and you’ll realize the speculative design exercise is not as outlandish.

A Radical Facelift Seems To Be Coming: 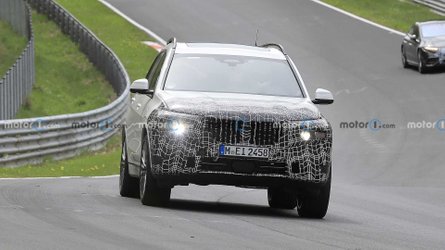 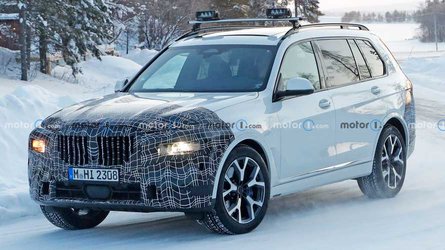 When will the camouflage come off? BMW unveiled the X7 back in October 2018, so it's likely not in a hurry to introduce the facelifted version. If it does want to shorten the first half of the product's life cycle, it could debut as early as September at the IAA show, which is switching from Frankfurt to Munich from 2021.

Not all of the company's future models will adopt the much-debated split headlights as the next 5 Series has been spotted with one-piece clusters, so we can at least give BMW credit for acknowledging that variety is indeed the spice of life.