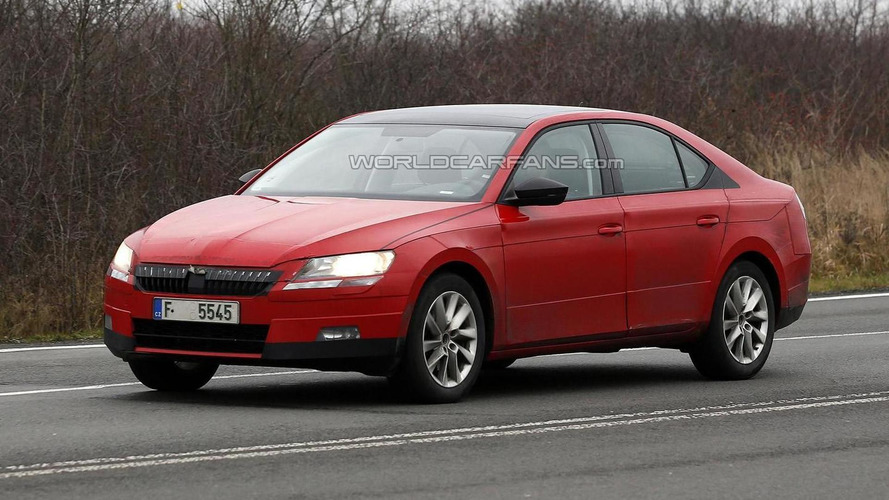 Our spy photographers have managed to capture on camera a prototype of the all-new Skoda Superb while undergoing testing procedures.

Our spy photographers have managed to capture on camera a prototype of the all-new Skoda Superb while undergoing testing procedures.

In the last few days Skoda has released a series of teasers with their upcoming next-gen flagship model and now a prototype was spotted testing and hiding a new design which will take cues from the VisionC concept. The Czech Passat will ride on the same stretched MQB platform as its Volkswagen sibling which means it will have access to the latest goodies found in the new Passat B8.

Although it will be 20mm longer and 50mm wider, the new Superb is expected to lose around 75 kg (165 lbs) and will feature a wheelbase elongated by 80mm to grant stellar rear legroom for this class. Trunk capacity will also grow to 625 liters with the rear seats up and 1,760 liters once you fold them down.

The engine lineup will be borrowed from the Passat while the thirsty V6 3.6 FSI of the outgoing model is going to be axed. The available motors will send their power as standard to the front axle but at an additional cost select engines will be optionally paired with an all-wheel drive system.

Skoda has already announced the third generation (fourth if we count the original model built between 1934 and 1949) will be revealed in mid-February 2015, followed a couple of weeks later by a public debut in Geneva, with deliveries kicking off in the summer.