Also, see how car stunts are filmed these days.

A lot of people dislike the new Toyota Supra mostly because of its close relationship to the latest BMW Z4, and those folks might enjoy the Japanese coupe flying through the air into a huge pile of cardboard boxes. This was a one-time stunt, and the car was totaled during the filming.

The video is a behind-the-scenes look at the filming of the Toyota Supra entended commercial The Pitch (below). The jump occurs near the end of the clip.

The specially prepared Supra has lots of extra weight in the back to prevent it from landing nose first like a lawn dart during the jump. There's also a beefy roll cage for protecting the driver, which requires partially stripping the cabin. It's mechanically stock.

The aftermath of the stunt was a Supra was a broken rear suspension, flat tires, and damage to the fascia at the back. The drive is fine, which is what really matters.

The latter half of the behind-the-scenes clip shows off the modern process of filming automotive stunts. There's a Porsche Cayenne with a boom-mounted camera on the roof. It takes five people inside the vehicle to control everything. 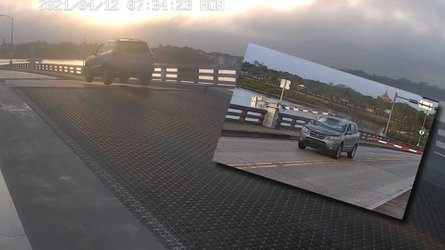 It Finally Happened: Someone Landed An Ill-Advised Drawbridge Jump
⠀ 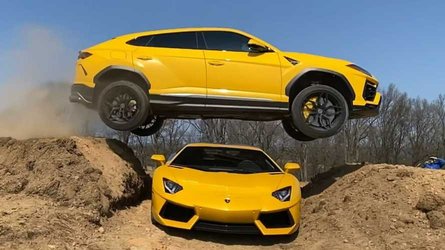 Drones have revolutionized the way people film automotive action. Their small size and maneuverability let a talented pilot get close to the action and capture the scene from otherwise impossible angles.

To maintain some interest in the Supra, Toyota is launching the A91 Carbon Fiber Special Edition for the 2022 model year. As the name hints, the model has carbon fiber parts for the front splitter, side sills, canards, and rear spoiler. The coupe rides on 19-inch wheels with a matte black finish.

Similarly, the interior has bits of carbon fiber trim. The cabin comes in a mix of red and black.

Toyota is making just 600 examples of the carbon fiber edition, and they're exclusive to North America. The company isn't disclosing pricing yet and deliveries start in the fall.