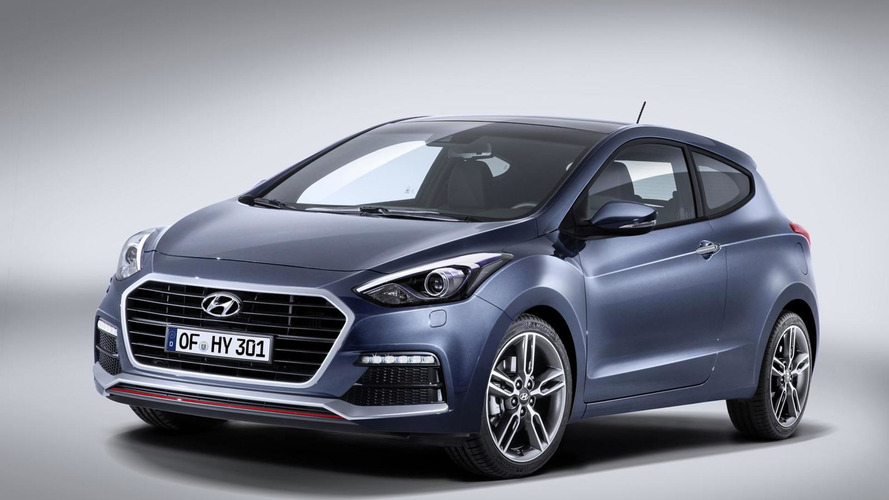 After a series of spy shots, Hyundai has taken the wraps off the i30 facelift which will be offered in a range-topping Turbo version.

After a series of spy shots, Hyundai has taken the wraps off the i30 facelift which will be offered in a range-topping Turbo version.

The most important news is the introduction of a Turbo version set to be offered in both three-door coupe and five-door hatchback body styles. It's basically Hyundai's version of the Kia cee'd GT / pro cee'd GT but with less power as the Kias have 204 HP (150 kW) and 265 Nm (195 lb-ft) whereas the Hyundais pack 186 HP (137 kW) and the same torque. Output is provided by a four-cylinder, 1.6-liter turbocharged gasoline engine working exclusively with a six-speed manual gearbox.

Aside from the powerful engine, the i30 Turbo also benefits from a retuned suspension for more agile handling while the steering has been modified to match the 18-inch wheels. Stopping power comes from 300mm front ventilated brake discs and 284mm solid discs while the more aggressive body kit encompasses beefier bumpers, side skirts as well as bi-xenon headlights with LED DRLs while at the back there's a dual exhaust system.

As for the more mundane i30 facelift, it comes with minor cosmetic tweaks such as the revamped hexagonal front grille, different wheels and fresh body paints: Jet Black, Orange Caramel and Polar White.

The refreshed Hyundai i30 lineup (including the Turbo version) will go on sale in the first months of 2015.

Check out the attached press release for further info.