Hatchback or sedan? There are no wrong answers.

Audi teased the next-generation RS3 last week by dropping a few images to accompany a press release about the success of its RS lineup. The Four Rings didn't actually talk about the compact hot hatch (and sedan) at all, only indirectly confirming it would keep its 2.5 TFSI engine by showing the firing order of the inline-five.

Our long-time collaborator Auditography had the privilege of getting up close and personal with the new RS3 models, and while technical specifications are still very much under embargo, he did have some tidbits to share. Audi will release videos of these camouflaged cars in a week from tomorrow (June 22) and will host the world premiere sometime next month.

These newly released images confirm the RS3 has lost the faux air vents of the new S3 at the front, but the ones at the back continue to be just for décor. Oval exhaust tips denote these cars sit at the top of the A3 food chain, as do the large wheels wrapped in low-profile Pirelli tires. Eagle-eyed readers will notice the front fenders are vented to cool down the uprated brakes, which could be of the carbon-ceramic variety.

The Audi Sport livery serving as camouflage not only flaunts the firing order of the turbocharged five-cylinder engine, but also the #anythingbutstandard hashtag that will likely be used during the teaser campaign. Maybe it's the disguise playing tricks on us, but the RS3 Sedan's trunk lid spoiler looks less aggressive than the one you'll find on the S3 Sedan.

Audi Sport Is Coming After The Mercedes-AMG A45/CLA45: 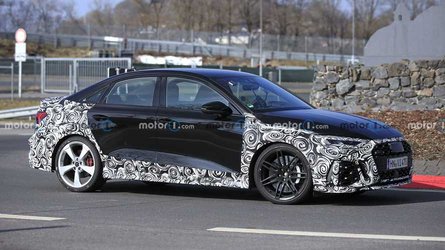 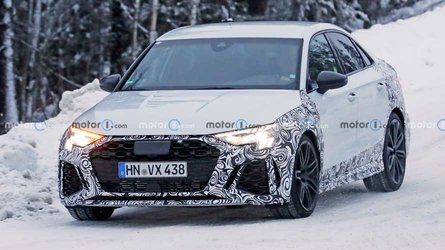 Expect the 2.5-liter engine to produce somewhere in the region of 394 horsepower and 354 pound-feet (480 Newton-meters) of torque to mirror the RS Q3 / RS Q3 Sportback as well as the TT RS. We've been hearing rumors about an upgraded inline-five, potentially for an RS3 Performance version, but nothing is official at this point. Even if the gossip is legit, an amped-up derivative would come later during the life cycle.