We wouldn't blame you for approaching this claim with some skepticism. The interiors on the Jeep Wrangler and Gladiator are pretty much identical, and for the vast majority of people out there, the above image posted recently to Jeep's official Facebook page looks like just another shot behind the wheel. But alas, that's exactly what they want you to think.

In the spirit of transparency, we didn't give this image the time of day, either. But then we happened upon a discussion at JeepGladiatorForum.com about this photo, and now our eyes are opened. Why? Because die-hard enthusiasts are absolute pros when it comes to catching minuscule details and they sleuthed the hell out of this. In short, the interior trim looks like what you get with the Wrangler 4xe, and a hybrid power-routing screen center appears to be showing on the touchscreen. But a few extremely obscure differences suggest this is actually a Gladiator greenhouse.

How obscure are we talking? A glimpse in the side view mirror shows a roll bar sitting at 90 degrees, and you won't find that on a four-door Wrangler. Couldn't this preview an electrified two-door Wrangler, which has the straighter bar? Not with four visible window switches, and there's more. The seat belt mounts match up to either a two-door Wrangler or the Gladiator, and another forum member spotted the button for the cargo bed light that you find on a Gladiator. It's crazy-specific stuff, but that's what makes super-enthusiasts so tough to fool.

The Latest On Gladiator: 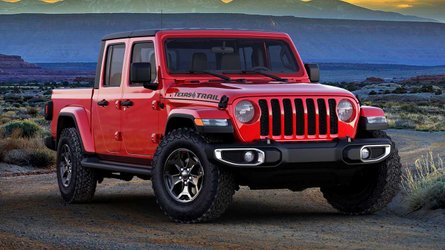 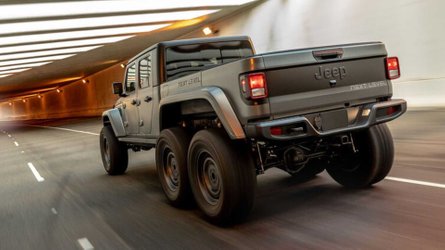 Jeep Gladiator Gets Another Crazy 6x6 Next Level Conversion

Beyond that, it's not like a Gladiator 4xe is a surprise. Jeep confirmed a hybrid Gladiator was in development at the beginning of 2021, though a timeframe for when it might arrive was never mentioned. For that matter, a name wasn't mentioned either so it's possible a hybrid Gladiator may not get 4xe branding. Whatever badge shows up for production, we know it's in the works and this photo could be a subtle hint that it's actually coming sooner rather than later.