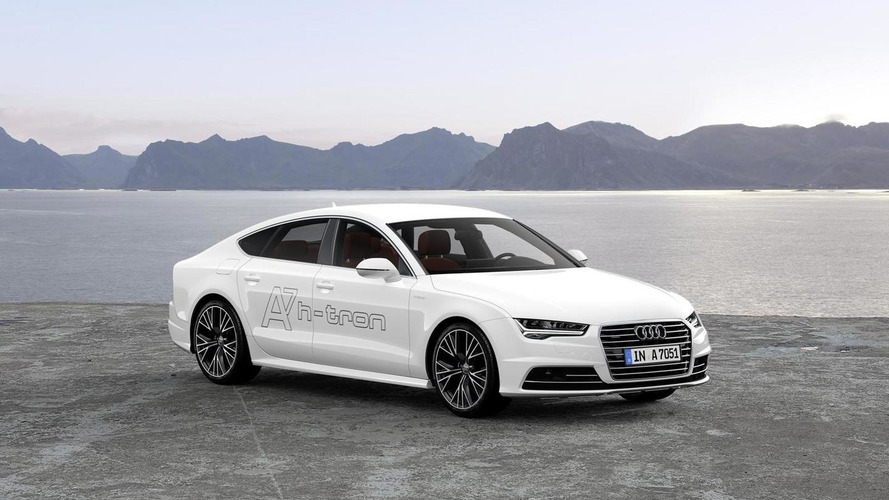 Following yesterday's announcement, Audi has taken the wraps off the A7 Sportback h-tron quattro concept at the Los Angeles Auto Show.

Following yesterday's announcement, Audi has taken the wraps off the A7 Sportback h-tron quattro concept at the Los Angeles Auto Show.

Looking virtually identical as the conventional-powered model, the A7 h-tron quattro concept is actually a fuel cell hydrogen vehicle with a plug-in hybrid setup. The complex system consists of a fuel cell stack installed under the hood where there are 300 individual cells featuring a polymer membrane which has a platinum-based catalyst on both sides. These fuel cells operate in the 230 to 360 voltage range and the main auxiliary assemblies feature a turbocharger that forces the air into the cells, a recirculation fan returning unused hydrogen into the anode, along with a coolant pump.

When used in fuel cell mode, the Audi A7 h-tron quattro concept needs around 1 kg (2.2 lbs) of hydrogen for each 62 miles (100 km) which represents the equivalent of 3.7 liters (one gallon) / 100 km. The four hydrogen tanks grant the vehicle with a range of more than 310.7 miles (500 km) and once depleted, a full refill takes approximately three minutes.

The fuel cell system works with an 8.8 kWh lithium-ion battery pack sourced from the A3 Sportback e-tron installed beneath the trunk and granting a 31.1 miles (50 km) electric range. It can be recharged either by recuperation or using a power socket which takes two hours (360 volts) or four hours (230 volts).

Check out the press release for further information.