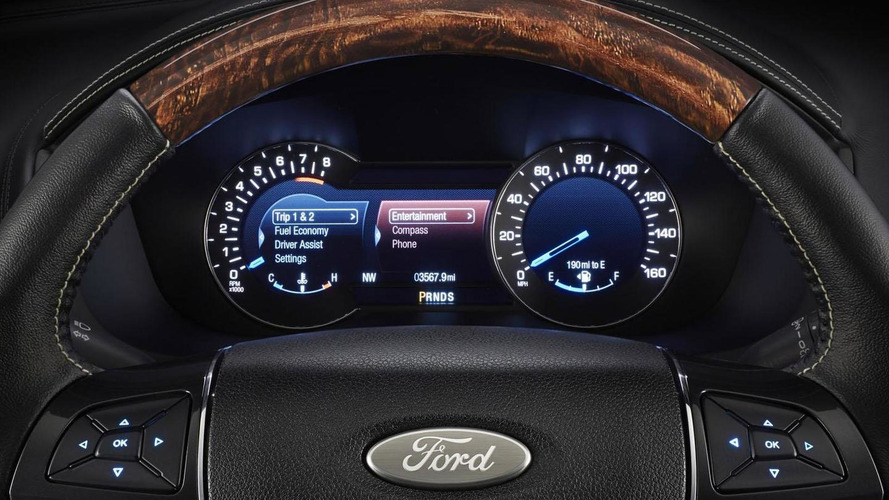 Ford is celebrating the 25th anniversary of the Explorer by unveiling the facelifted model at the Los Angeles Auto Show.

Ford is celebrating the 25th anniversary of the Explorer by unveiling the facelifted model at the Los Angeles Auto Show.

Looking instantly recognizable, the facelifted crossover adopts a new front bumper, a revised grille and restyled headlights. The styling changes are less noticeable out back but include new taillights and an optimized spoiler that promises to reduce drag.

The interior is evolutionary but it adopts higher quality materials and a new center stack with "real buttons." The latter change isn't pretty but it should alleviate complaints from frustrated customers who despised the previous touch-sensitive controls.

The 2016 Explorer will also spawn a new range-topping Platinum variant. It will be distinguished by LED headlights, silver-painted skid plates, a dual-panel moonroof and 20-inch two-tone alloy wheels. The model also comes with an upscale interior that has perforated Nirvana leather seats, satin-finished ash wood trim, brushed aluminum accents and a heated leather steering wheel with wood inserts. Other highlights include accent stitching, a digital instrument cluster, a 500-watt Sony audio system and a brushed aluminum Ford emblem on the steering wheel.

Under the hood, the 2.0-liter EcoBoost four-cylinder engine has been replaced by the new 2.3-liter EcoBoost unit from the 2015 Mustang. It produces "at least" 270 bhp (201 kW) and 300 lb-ft (406 Nm) of torque. Despite being more powerful than its predecessor, Ford says the engine isn't expected to have any penalties at the pump.

The 2016 Ford Explorer will go on sale next summer and pricing will be announced closer to launch.