It invested 65,000 engineering hours to finalize the production car.

Chirons are unique by definition as each and every customer has endless possibilities to personalize the W16 hypercar. It's safe to assume not a single person walks into a Bugatti dealership and asks to buy the "cheapest" possible version since owners typically splurge more on optional features. The La Voiture Noire takes exclusivity to a whole new level since only one will be made with this achingly beautiful carbon fiber body.

Paying homage to the lost Type 57 SC Atlantic, The Black Car is likely debuting in final production form on May 31. In the build-up to its world premiere, Bugatti has released a few images showing the one-of-one coupe undergoing track testing. We also get to learn that no fewer than 65,000 engineering hours have been invested into the project, representing the equivalent of seven years and a little over four months. That's mighty impressive and surprising at the same time considering the La Voiture Noire is heavily based on the Chiron.

Billed as being "the most unique piece of automotive haute couture ever created," the all-black Bugatti was originally unveiled in March 2019 at the Geneva show as an electrically powered rolling display shell. Fast forward to May 2021, the engine bay now hosts the quad-turbo 8.0-liter engine developing an enormous 1,500 horsepower and 1,600 Newton-meters (1,180 pound-feet) of torque.

Bugatti describes the La Voiture Noire as a "piece of automotive art," one that has what it takes to "outlive centuries." Seeing the mandatory WLTP fuel consumption figures attached to the Facebook post where the images were published is comical. It comes as no surprise it fits into the "G" efficiency class given the combined 22 liters / 100 km (10.69 miles per gallon) and 505.61 grams of CO2 emissions per kilometer.

The Black Car In The News: 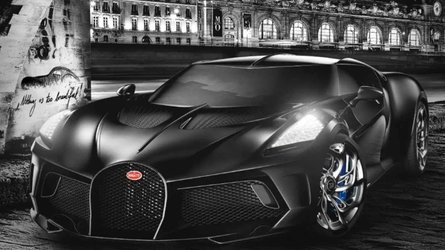 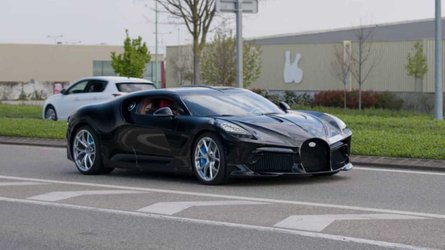 It's widely believed the La Voiture Noire is the world's most expensive new car ever by carrying an exorbitant price tag of €11 million before taxes. Bugatti hasn't divulged the owner's identity, but we do know that person paid roughly four and a half times the price of a "base" Chiron. At the same time, the hypercar with six exhaust tips makes the Chiron Super Sport 300+ (€3.5 million) seem affordable by comparison.

The peeps from Molsheim are not done with the Chiron-based projects as after the one-off La Voiture Noire and the track-only Bolide (only a concept for now), a new mysterious hypercar will be unveiled later in 2021.