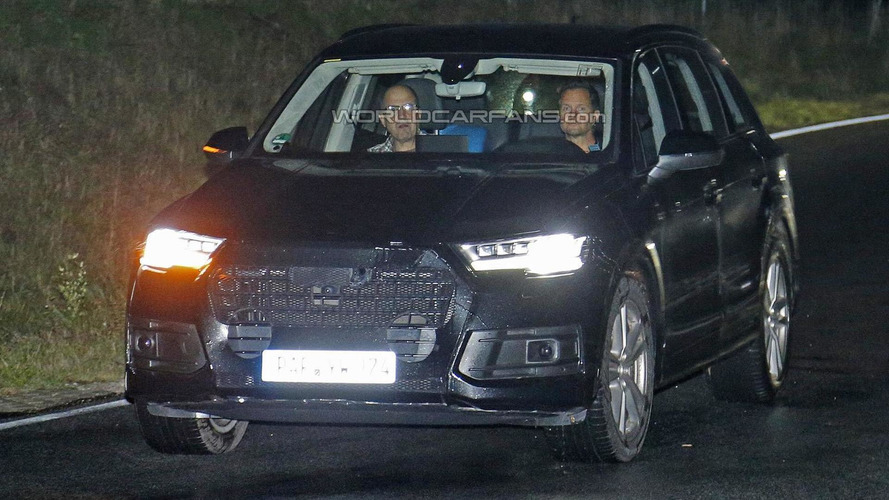 The second generation Audi Q7 has returned in a fresh batch of revealing spy shots taken late in the night.

The second generation Audi Q7 has returned in a fresh batch of revealing spy shots taken late in the night.

The images were captured at 3 AM showing Audi putting the finishing touches on the second generation Q7. The SUV's bulkiness will soon be history as the overhauled model will feature a significantly sharper design heavily influenced by Audi's latest facelifts. The prototype was wearing a thin layer of camouflage so now we get to take our best look at Ingolstadt's flagship SUV which as you can see will be offered with optional matrix LED headlights.

Other noticeable features include very small fog lights, LED taillights, Audi's now familiar hexagonal enlarged front grille, smaller third side window and a more subtle roof-mounted rear spoiler. In a previous batch of spy shots we saw some bits and pieces of the interior, including a fresh four-spoke steering wheel, bigger touchpad, free-standing touchscreen display and analog dials which could be replaced with digital ones for the production-spec car.

The 2016 Audi Q7 will be introduced in January at the North American International Auto Show in Detroit and is expected to go on a massive 800 lbs (363 kg) diet. It will be powered by upgraded versions of the familiar six- and eight-cylinder engines and there’s also going to be a 373 HP & 700 Nm plug-in hybrid derivative which will reportedly get a 3.0-liter V6 TDI teamed up with an electric motor and a lithium-ion battery.

There should also be a range-topping SQ7 model which will likely use the same hardware arrangement as the RS5 TDI concept, a twin-turbo V6 3.0-liter TDI working with an electric turbocharger and a lithium-ion battery pack. In the concept it provides 385 HP (283 kW) and 750 Nm (553 lb-ft) but the heavier SQ7 will likely improve those numbers significantly.