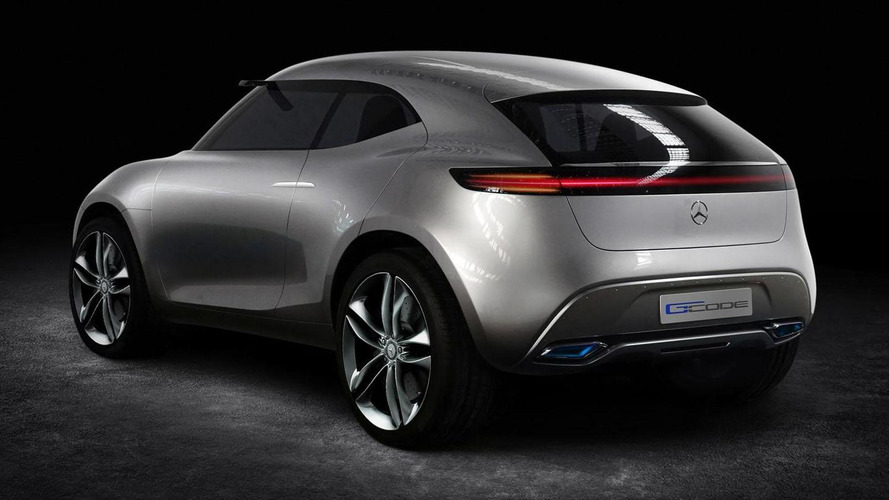 Mercedes-Benz has taken the wraps off an interesting concept called G-Code, a very compact crossover destined for urban use.

Mercedes-Benz has taken the wraps off an interesting concept called G-Code, a very compact crossover destined for urban use.

It seems Mercedes-Benz is thinking about a smaller crossover to slot below the GLA as the G-Code concept seen here is 4100mm long which makes it 317mm shorter than the GLA. It's 96mm wider (at 1900mm) and 6mm taller (at 1500mm) and could preview a forthcoming production version to go up against the already confirmed Audi Q1.

The styling is a result of a collaboration between Mercedes-Benz's design studios in Germany and China who envisioned a high-riding compact hatchback with short overhangs, LED headlights & taillights and beefy 21-inch alloy wheels. It adopts a canopy-style glasshouse while instead of side mirrors it boasts two cameras installed on retractable arms on the upper side of the A pillars. Depending on the driving mode, the front grille is backlit in three distinct colors: red, blue or purple.

The body has received a "multi-voltaic" paint that works as a solar cell producing electric energy while under sunlight and it also regenerates electrostatic energy when wind is drawn over the body's surface. The petite crossover also features an interesting "power-on-the-move suspension" that uses the energy generated during the rebound movement of the dampers and springs to drive a generator to create electricity.

Open the coach-style doors and you notice a simple yet functional cabin with an uncluttered design with carbon fiber seats and a large digital display replacing most of the controls. Also inside are aluminum grab handles, round air vents while the AC system uses oxygen generated during hydrogen synthesis as a method to provide fresh air in the cabin even in congested urban environments. Located below the trunk are two electric scooters which are recharged while the vehicle is being driven.

Comprehensive details about the hardware setup are not available at this point but Mercedes-Benz said the G-Code concept is powered by a "state-of-the-art turbocharged combustion engine that runs on hydrogen" and an "electric motor that drives the rear axle" which means it has an all-wheel drive layout. Power is channeled to the axles with help from a dual-clutch transmission and an electric propshaft.

Scheduled to be introduced later this month at the Los Angeles Auto Show, the Mercedes-Benz G-Code will remain only a concept, just like the Ener-G-Force concept from two years ago.