It all comes down to the launch.

What does nine years of Audi evolution look like? Visually, there isn't a tremendous distinction between the new S3 and old RS3 from 2012. Sure, the grille is much bigger on the latest Audi and there are plenty of styling cues to easily identify new from old, but the overall profile is nearly the same. They also weigh the same, shift seven gears with dual-clutch transmissions, and their as-new sticker prices are nearly identical, too.

It's certainly not the same story under the skin. Among other things, the old RS3 holds a power advantage with its larger 2.5-liter inline-five, turbocharged to deliver a sensational-sounding 340 horsepower (254 kilowatts). The S3 isn't a slouch, however, with 310 hp (231 kW) from its turbocharged 2.0-liter engine. The RS3 also holds a slight torque advantage, so on paper it should be the quicker of the two, albeit slightly. The variables come down to details such as gear ratios and tech improvements for better launches and quicker shifts.

We don't have details on gear ratios, but after three standing-start drag races, it's clear the S3 is still very competitive with the old RS3. The newer car seems to have an easier time with the launch, provided the tarmac isn't tainted with cried mud. On the flip side, the S3 seems to upshift a bit early at times, giving the RS3 a window to pull ahead. At the end of it all, both models claim victories, with the finishing order coming down to which car nabbed a better launch. 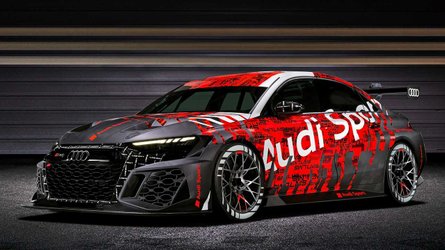 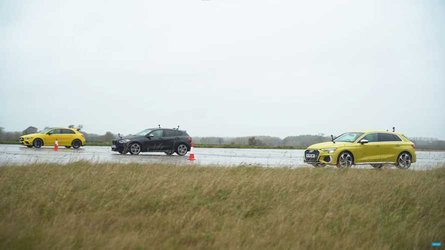 As per usual, roll races and a braking test were also part of the action, though at speed the RS3's power dishes out an undeniable advantage. Nine years of development let the S3 stop a bit better, but again, the results are so similar it may as well be a dead heat.

In other words, the new RS3 Sportback should be positively epic when Audi finally decides to lift the covers on its hottest hot hatch. Hopefully, that will happen later this year.