The manual gearbox is dead, replaced by a shift-by-wire DSG to maximize interior space.

Never has Volkswagen put this much effort into the teaser campaign for a new Transporter model. The T7 is right around the corner, and the company's commercial arm is intensifying its preview campaign for the passenger-oriented Multivan version ahead of its June premiere. After showing a design sketch of the interior just a few days ago, VW has now released more revealing teasers.

Starting from the outside, the variant shown here is the Bulli with its two-tone paint and an LED light bar in the grille to create a visual connection with the daytime running lights embedded into the main clusters. It's a look we've seen on other recent models, including the facelifted Polo introduced last week. VW doesn't say what type of powertrain hides underneath the redesigned sheet metal, but it's likely the already confirmed plug-in hybrid setup.

The main focus of VW Commercial Vehicles' teaser is the interior with a dual-screen digital dashboard adapted from the eighth-generation Golf. It adds fuel to the rumors the T7 will switch to the MQB platform to offer a more car-like experience, but the company remains tight-lipped for the time being. We do get to learn the manual transmission has been axed as the Multivan will be a DSG-only affair.

Not just any type of a dual-clutch automatic, but a shift-by-wire setup as seen in the latest crop of VW Group compact cars such as the Leon, Octavia, A3, and obviously the Golf. Axing the third pedal and adopting shift-by-wire for the auto means there's no need for a mechanical linkage anymore, thus freeing up valuable space in the middle.

The New Bulli Is Here: 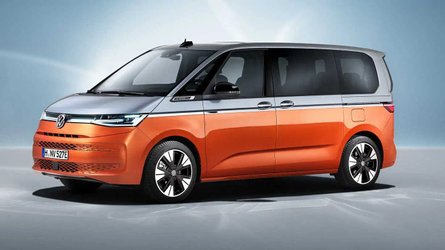 The 10-inch touchscreen now provides a 360-degree view of the Multivan for the very first time thanks to the optional Area View system to make parking and maneuvering in a tight spot much easier. Aside from retiring the stick shift, VW Commercial Vehicles is also saying goodbye to the traditional handbrake lever. Instead, a button-activated electric parking brake has been installed to the left of the infotainment to increase the amount of space available between the two front seats.

By making these changes, it's now possible to quickly jump from the front seats into the back or use the built-in table as a center console between the driver and front passenger seats. As previously mentioned, the table is part of a track system and can be docked in any position while all seats are now individual as VW is retiring the rear bench.

Additional teasers will be released until the debut scheduled to take place in a little over a month from now. As a reminder, VW Commercial Vehicles is gearing up to introduce only the Multivan/Bulli because the T6.1-based Transporter workhorse will continue to be sold alongside the passenger-focused T7.