VW says it has reinvented the table.

While we're patiently waiting for Volkswagen Commercial Services to (finally) bring back the Microbus with an electric twist in 2022 as the ID Buzz, another family hauler is about to break cover. The all-new Transporter will be shown in a couple of months in the passenger-oriented Multivan flavor set to peacefully coexist alongside the T6.1-based commercial version for a number of years.

A new teaser image for the revamped Multivan highlights the giant greenhouse with massive side windows and an impressively large dual-pane sunroof. The design sketch is accompanied by some interesting details released by VW's commercial arm, highlighting the cabin's flexibility. For example, the full-width bench on the third row has been dropped altogether, replaced with individual seats that can be yanked out with minimal effort.

VW touts "much lighter" seats in the second and third rows that can be moved "extremely quickly" and removed whenever you need to carry cargo instead of people. A newly developed track system extends from the rear to the second-row seats, thus greatly improving flexibility. One neat feature is the ability to push the third-row middle seat forward to almost meet the first-row seats, thus creating the ideal storage for a bicycle or other long items.

The Multivan has had a table inside since 1985 and with the impending arrival of the T7, VW says it has "reinvented" the table by implementing a track system allowing users to dock it in any position. Corroborated with the possibility to remove the seats on one side of the vehicle, the Multivan's interior flexibility will be unbeatable. 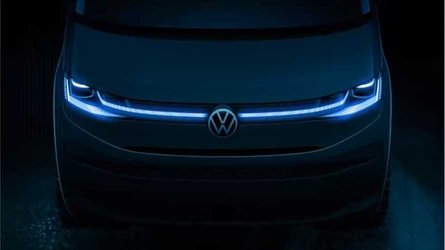 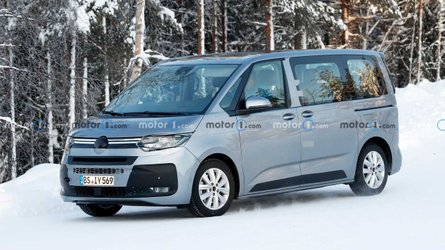 To that end, the new T7 will offer face-to-face seating arrangement by rotating middle-row seats by 180 degrees for a feature VW has been offering since the days of the T3 launched over 35 years ago. The new generation will be the first Multivan to have only individual seats, with up to five movable and removable in the second and third rows.

The official reveal is scheduled to take place sometime in June but VW says additional previews are scheduled between now and the big debut. Nothing is official at this point, although we're hearing the Multivan will switch to the omnipresent MQB platform, which should make it feel more car-like than ever before. A plug-in hybrid powertrain has been confirmed and will be available from day one.