The last decade saw the Ford F-150 Raptor dominate a segment of one. It stood alone as a tried-and-true off-road pickup, but that's no longer the case. Last year, Ram introduced the TRX, a 702-horsepower (523-kilowatt) monster that has Ford preparing an even hotter Raptor variant. Our spy photographers have caught it testing before, but this is the first time we get to hear the Ford's rumbling exhaust note.

The video clip is short as it catches the pickup at a stoplight that turns green, catching the exhaust note as it speeds across the intersection. It sounds good, too, though that's something we didn't doubt. Power is expected to come from Ford's Predator supercharged 5.2-liter V8 engine that propels the Mustang, where it makes 760 hp (567 kW). That'd be plenty to take on the TRX. It's not expected to make that much in the Raptor, though it should produce between 725 and 750 hp (540 and 560 kW).

Ford already revealed the third-generation Raptor earlier this year, which will pack the brand's 3.5-liter EcoBoost V6. However, the company has yet to release the engine's performance specifications. The new Raptor R doesn't look wildly different from the one we've seen already, though the R will get a new, unique grille, beefier trailing arms, and exclusive wheels, along with the increase in horsepower. There could be Raptor R-specific interior touches, too.

R Is For Rumbly: 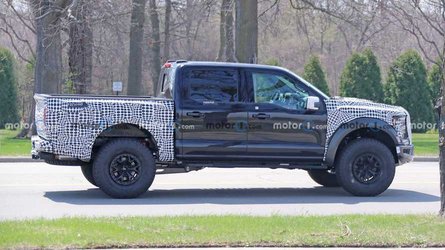 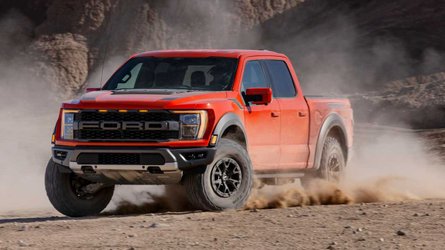 The regular 2021 Ford F-150 Raptor is supposed to reach dealers this summer, though the ongoing semiconductor shortage is crippling automotive production worldwide. This has forced Ford to halt some F-150 production while storing unfinished pickups. The Raptor will be built at Ford's Dearborn Truck Plant. Those wanting the hotter Raptor R will have to wait as Ford isn't expected to debut the pickup until later this year before it goes on sale in 2022.