Nissan GT-R prototype spied inside and out 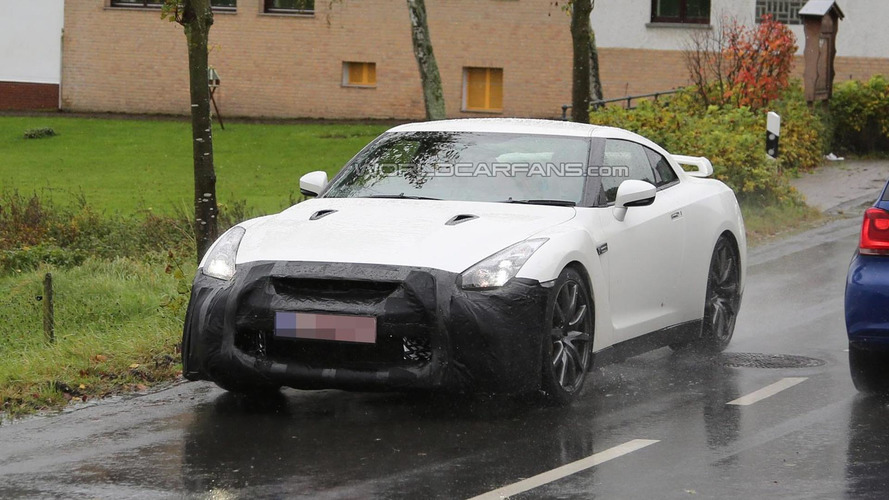 Another white prototype of the Nissan GT-R has been spied undergoing testing on a wet day.

Another white prototype of the Nissan GT-R has been spied undergoing testing on a wet day.

We don't know for sure whether this is one last facelift for the current GT-R R35 or we are looking at a test mule for the next generation R36 scheduled to come out in 2017 or 2018. The vehicle spotted here comes with a heavily disguised front bumper while the rest of the car appears to be stock. This time our spy photographers managed to take a couple of spy shots with the interior cabin which looks stock except for the testing equipment.

If this turns out to be a facelift, expect some minor mechanical tweaks before the next generation GT-R's launch with an already confirmed hybrid setup. Based on a recent rumor, Nissan's supercar will provide a massive combined output of 784 bhp (585 kW) coming from an uprated variant of the twin-turbo V6 3.8-liter packing 650 bhp (485 kW) mixed up with a 134 bhp (100 kW) electric motor. Developed in collaboration with Williams, the hybrid system will work together with a new eight-speed gearbox which will have to handle a whopping 998 Nm (737 lb-ft) of torque.

On the styling front, it will borrow design cues from the 2020 Vision Gran Turismo concept and the new body will help cool the hybrid system while improving aerodynamics at the same time. A preview concept is expected to show up at next year's Tokyo Motor Show.

Gallery: Nissan GT-R prototype spied inside and out