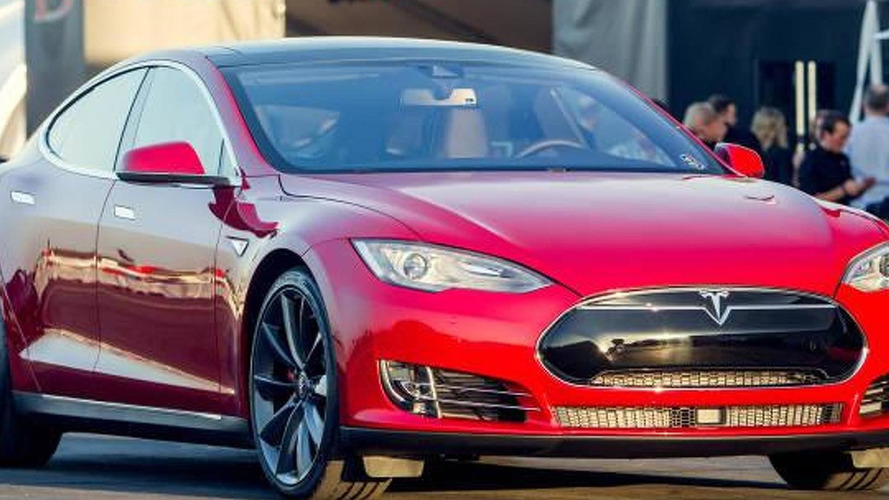 Tesla Motors has taken the wraps off the range-topping Model S P85D which brings a wide array of massive improvements.

Tesla Motors has taken the wraps off the range-topping Model S P85D which brings a wide array of massive improvements.

First and foremost, the vehicle now has an all-wheel drive arrangement thanks to a dual electric motor configuration after installing a 211 bhp front motor which works together with the 470 bhp rear one in order to enable the high-performance Model S pack a combined output of 691 bhp (515 kW) and 687 lb-ft (930 Nm), with 221 bhp & 244 lb-ft at the front and 470 bhp & 443 lb-ft in the back. Thanks to this hardware arrangement, the vehicle needs only 3.2 seconds for the 0-60 mph (0-96 km/h) run which makes it a full second quicker than the previous P85 flagship variant.

Adding the front electric motor has increased the car's weight by 291 lbs (132 kg) to 4,936 lbs (2,239 kg) distributed 50:50. There aren't any significant visual differences as Tesla Motors only added red brake calipers and a badge at the back.

Aside from introducing these three new all-wheel drive models, Tesla Motors has also announced a semi-autonomous driving system which uses optical cameras to scan the road up ahead. It also has a 360-degree sonar to detect traffic and barricades and will come to a full stop if the traffic in front slows down completely.

As a final note, Elon Musk says that we should expect fully autonomous vehicles in the next 5-6 years.